The federal government adamantly refuses to negotiate supply management in the North American Free Trade Agreement (NAFTA) talks. Perhaps this is because our politicians — including the many who understand why supply management should go — assume that Canadians won’t support putting the system on the table.

This is absolutely false.

Ten months ago, at the start of the NAFTA negotiations, more than two-thirds of Canadian respondents said in a national poll said they were willing to put supply management on the negotiating table; fewer than one in five said they were willing to defend it at any cost in the context of the NAFTA negotiations. (There were three questions in the poll; I will discuss the first and the third).

Considering how much has changed since then, it’s no stretch to predict that even fewer Canadians now believe we should defend supply management at all cost. Yet, the politicians persist. They should start acknowledging that the public may no longer support them.

The poll, done in August 2017 by NRG Research Group for the Canada West Foundation, anticipated our current predicament in the NAFTA negotiations by asking Canadians a different question about supply management than have past polls. Rather than asking how much respondents liked or disliked supply management, the question asked how much they were willing to sacrifice to keep supply management, in the context of the NAFTA negotiations. The introduction of real world NAFTA consequences and costs to the question moved public opinion in ways that purely domestic costs, like paying more for dairy products, did not.

Question 1 in the poll asked: “Under a system called ‘supply management,’ the government of Canada keeps most foreign dairy products out of Canada, sets a limit on the level of dairy production in Canada, and allocates guaranteed milk production and sales quotas to every qualified dairy farmer. This provides a stable and profitable economic situation for dairy farmers and the dairy industry as a whole. However, it also means dairy products like milk, cheese and yogurt are 2 to 3 times more expensive in Canada than in some other countries. Do you (the order of options was rotated when asked): 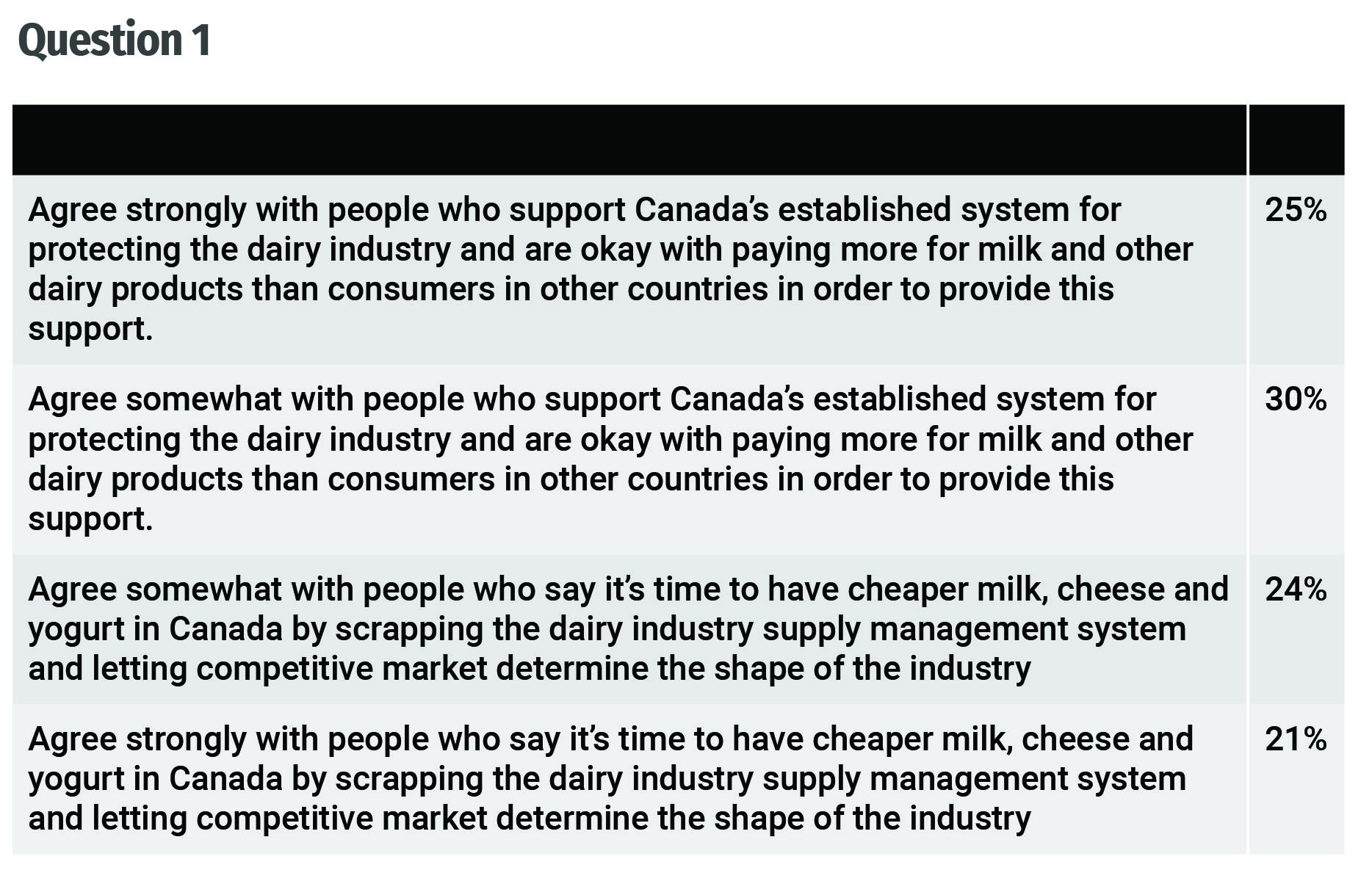 Question 3 in the poll asked: “Donald Trump has recently joined other US State and Federal lawmakers – both Republican and Democrat – as well as other countries like New Zealand and Australia – who have all been consistently clear that ending Canadian supply management and gaining greater access to Canada’s market for milk, cheese, and other dairy products is important to them. The US has said that getting a new deal on dairy products will be a top priority for them in renegotiating NAFTA. Please select the statement below that best reflects your point of view on how strongly the Trudeau government should defend Canada’s system of dairy industry supply management amongst the range of issues at the NAFTA negotiating table” (only one choice was allowed). 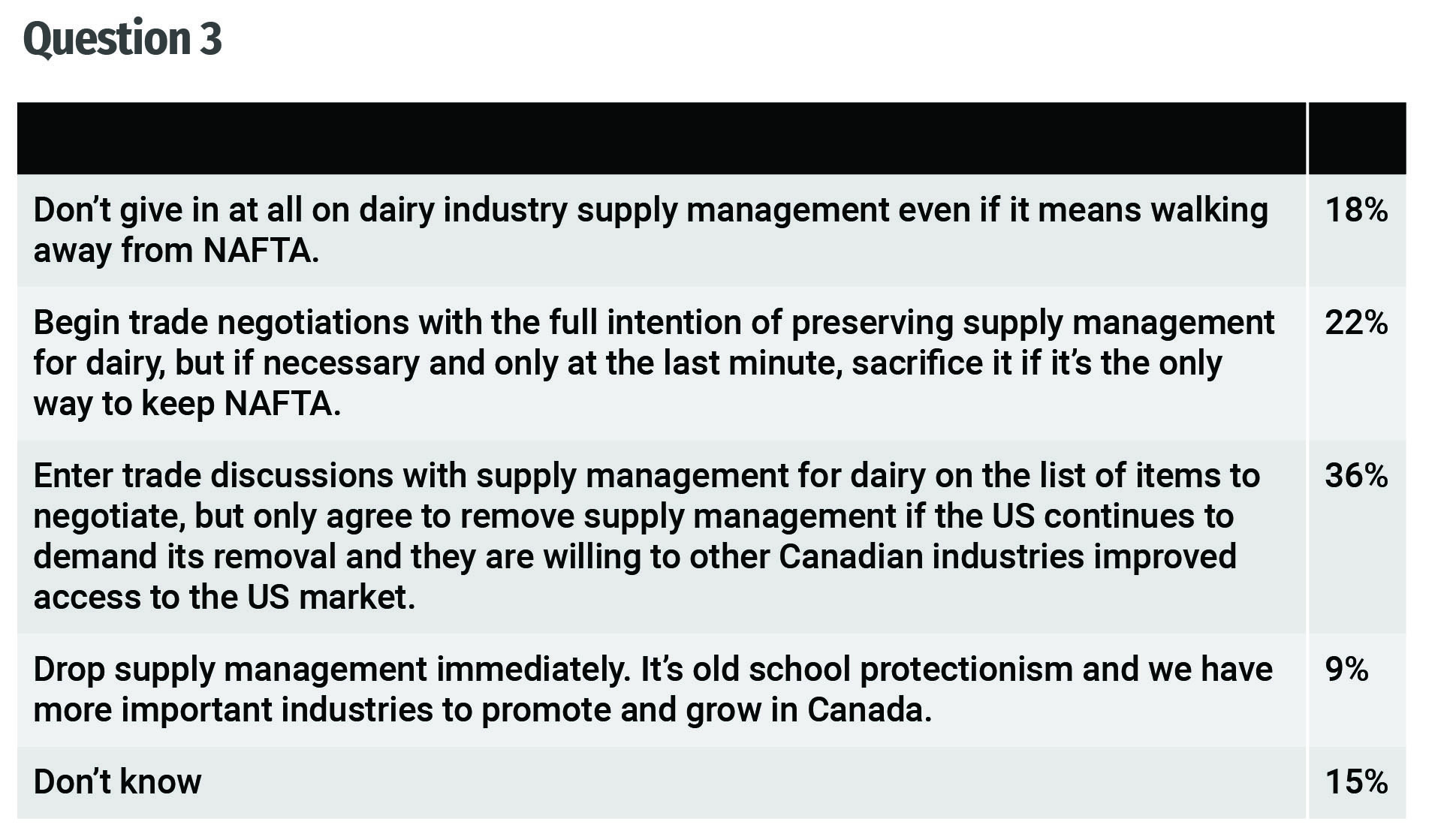 So, when asked about paying more out of pocket for dairy products, a narrow majority of Canadians, 55 percent, were willing to pay more. But fully 45 percent were more interested in getting rid of supply management in exchange for cheaper milk (see question 1).

When the stakes were raised from personal cost to national interest, the responses changed and an overwhelming majority, 67 percent, were willing to negotiate away supply management either as a last resort or up front to see what could be gained; 9 percent — close to 1 in 10 — were ready to drop it immediately with nothing in return (see question 3).

The poll, including question 3, was conducted before negotiations really started, and before any of the recent Trump trade war threats and aggressive actions. But what is important is that more than two-thirds of Canadians were willing to put supply management on the negotiating table in the context of NAFTA negotiations. Given that the negative consequences have now become reality, that support has likely only grown. Statements by our prime minister, the federal cabinet and the provincial premiers seem to be based on the false assumption that Canadians are unwilling to put supply management on the negotiating table.

This openness to changes is not just theoretical. Canada has already made concessions on supply management and Canadians have allowed them to happen. First, concessions were made to the Europeans in the Canada-European Union Comprehensive Economic and Trade Agreement (CETA), opening up 3 percent of our Canadian dairy market to competition. Even before the NAFTA talks started, Canada offered the US access to another 3.25 percent of the Canadian dairy market in the Trans-Pacific Partnership (TPP), before the US pulled out of the agreement under Trump.

It is certainly frustrating to the Americans that Canada is suddenly now unwilling to offer the same concessions for NAFTA that it gave them in the TPP, or that it gave the Europeans in CETA. Talk by Canadian premiers visiting Washington, DC, of making no concessions whatsoever ignores this reality for the sake of domestic Canadian political posturing. The prime minister has recently mused publicly about making concessions on supply management. He should know that when it comes to NAFTA and supply management, Canadians are already well ahead of him on this issue.