This week, Canada announced it will join the 10 other countries of Trans-Pacific Partnership (TPP) trade agreement. The deal will be signed in March.

For Canadian companies, particularly in the West, this opens doors that they have been banging on for years. Our modelling shows that the TPP will bring hundreds of millions of dollars a year to the Canadian economy as our exporters take market share from the U.S. in TPP markets. It also means we will catch up with our competitors who are way ahead of us on market access to Asia. Canadian agri-food and agriculture are among the biggest winners.

The countries that make up the agreement are: Canada, Japan, Mexico, Malaysia, Singapore, Vietnam, Australia, New Zealand, Chile, Peru, and Brunei. With all the attention on NAFTA, it may surprise many that there is a good chance that the deal could come into effect before NAFTA renegotiations are concluded. Businesses need to put this deal on their radar now.  Below are a few points businesses need to know about the agreement.

While a lot of ink spilled in Canada has focused on the government progressive trade agenda, there was little in the way of substantial changes in what is now rebranded the Comprehensive and Progressive Agreement for Trans-Pacific Partnership (CPTPP). And that is a good thing. Market access measures, including tariff and non-tariff barrier reductions on goods, services and investment, remain. Ninety per cent of tariffs will be cut as soon as the agreement comes into force. Provisions covering modern trade issues like digital commerce are still included. The agreement also opens nearly all service and investment sectors to businesses from any TPP countries.

2) The TPP is not your typical trade agreement. It’s bigger. Much bigger.

The deal is bigger than just the individual countries and tariff cuts. It provides the opportunity to link supply chains across the region to compete globally. The deal gives Canadian businesses one set of modern trade rules to create a “NAFTA-like” trade bloc among all 11 participating countries. For Canada, the agreement will update rules for companies trading with Chile, Peru and Mexico under our existing trade agreements. But, that same set of rules will apply for firms thinking of trading with Japan, Australia, New Zealand, Singapore, Malaysia, Vietnam, and Brunei. Businesses can buy components or inputs from any country or collection of countries to make goods or sell services into any other TPP country. So, something you buy from Japan that is made entirely of components that Japan imports from Vietnam and Malaysia or from Australia and Chile would still be able to be imported under the more favorable TPP tariffs. If this were a traditional bilateral agreement with Japan, that would not be the case. Companies that have supply chains in Mexico (a TPP member) can now think about leveraging those for sales beyond the U.S. into any TPP country, even if the U.S. leaves NAFTA.

Meanwhile, a New Zealand company is already investing in lamb production in Manitoba, to build a multinational sheep business. Western Canada is attractive because it is close to the U.S. market and also has transportation access to Asia through the B.C. ports. 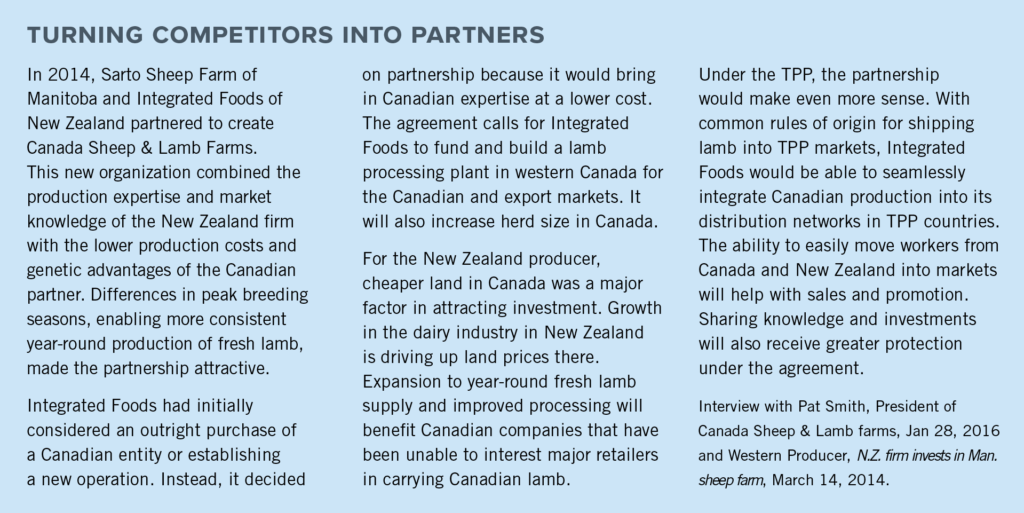 Canada currently has one trade agreement in Asia: South Korea. We lag far behind our competitors – Chile, for example, has 12. Joining the TPP will give Canada the equivalent of four new trade agreements in Asia (Japan, Vietnam, Malaysia and Singapore) and three updated agreements in Latin America (Chile, Peru, and Mexico).

Immediately securing a trade deal with Japan – a long held but elusive goal for Canada – is one of our biggest wins.. The access gained under the TPP is better than anything Canada could have conceivably negotiated on its own. Because the U.S. was originally part of the TPP, Japan gave concessions at the negotiating table that Canada would not have been able to secure in one-on-one negotiations. We will now benefit from these advantages while the U.S., which left the deal last year, will watch from the sidelines.

Malaysia, one of the fastest growing economies in Asia, is a TPP member, as is Singapore and Vietnam. Many of Malaysia’s major imports are products western Canada exports, such as petroleum products, plastics and chemicals. Consumers in Vietnam have a growing demand for beef, but the country has limited land space available to develop a domestic industry large enough to meet supply. The U.S. has been working to take advantage of increasing Vietnamese beef imports. With Canada now part of the TPP and the U.S. out, there is an opportunity for Canadian beef producers to replace U.S. exports to Vietnam.

4) Canada now has a leg up over the U.S. in the Asia-Pacific

The combination of lower tariffs, non-tariff market access measures and having one set of rules for trade with 10 economies with the ability to build new supply and production chains across the TPP adds up to a significant advantage for Canadian companies over competitors in the U.S. and Europe. Businesses may want to revisit pre-TPP competitive calculations and take another look at plans for expansion into TPP markets in and of themselves or as a jumping off point for wider Asian expansion.

Further, the TPP gives Canada a rare opportunity to take market share away from the U.S. in TPP countries. For example, Canadian beef producers exporting to Japan can expect a reduction in tariffs, while U.S. beef exporters will still be subject to 38.5 per cent tariffs. Given that more than 30 per cent of Japan’s beef imports come from the U.S. while Canada supplies about two per cent, there is a lot of room for Canada to take market share (sales) away from the U.S. We can expect to see similar scenarios on a variety of products we export, and in multiple TPP markets.

5) The TPP will only grow from here

Other countries have already queued to join the TPP – Colombia, Taiwan, Thailand and Korea have all expressed strong interest and are good candidates to join quickly, adding another 192 million, mostly middle-class, customers to the TPP market. Even countries as far away as the U.K. have expressed interest though it is a much longer shot to join in the near term. Companies thinking about taking advantage of Canada’s participation in the TPP can think not just about current members but also countries they want to do business with that may join down the road.

– Naomi Christensen is senior policy analyst and Carlo Dade is Director of the Trade & Investment Centre at the Canada West Foundation.