Canada’s population is getting older – except in the Prairie provinces that is. Manitoba, Saskatchewan and Alberta have among the youngest populations and lower proportion of seniors compared to the rest of Canada. [1] Despite a healthy stream of newcomers to British Columbia via immigration and internal migration, British Columbia is the only Western province whose population is older than the Canadian average—and the only Western province with a higher-than-average proportion of seniors.

At 1.4 per cent, Canada has the fastest population growth rate of any G7 country – double that of the United States and opposite the population decline experienced in both Japan and Italy.[2] Yet, like most industrialized countries, in Canada the proportion of the population aged 65 aged and over has been slowly increasing since the early 20thcentury due to increasing life expectancy and decreases in birth rates. With the baby-boom cohort (the 8.2 million babies born between 1946-1965) soon to enter their senior years, the proportion of the total population aged 65 and over in Canada is expected to increase to between 21 – 23.4 per cent by 2030 (depending on life expectancy) compared to 17.2 per cent in 2018. [3] Between 1971 and 2020, life expectancy in Canada grew to 82.6 years in 2020, from 72.7 years in 1971.[4]

In 2016, the number of seniors in Canada exceeded the number of children for the first time—and that trend continues. However, the opposite is true in Manitoba, Saskatchewan, and Alberta. 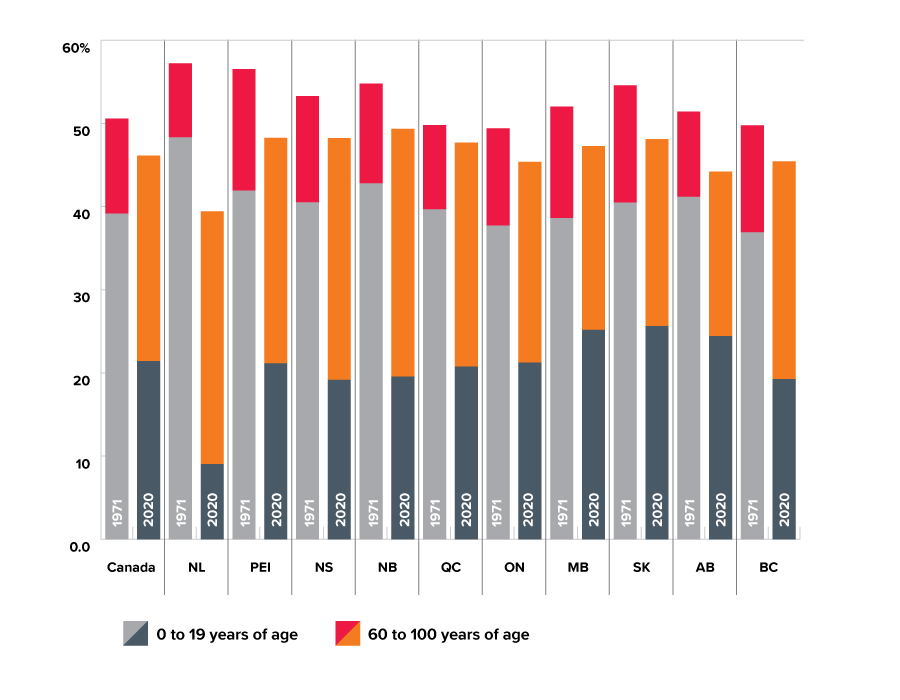 The national (and even global) aging trend poses critical questions for the future for Canada and the western provinces alike. With lower birth rates on average for western Canadian families as compared to a decade ago, longer life expectancy and the onslaught of retirement parties, it is important to begin to consider potential implications of demographic changes.

With the baby-boomer cohort either experiencing or approaching their retirement years, the need to reinvigorate the workforce is pressing. As  people are living longer, should the expected retirement age increase as our life expectancy rises? Are the growing rates of seniorpreneurship (as outlined in the CWF report, Seniorpreneurship: Don’t retire – rewire, June 2017) seen in recent years offer a different approach ?

What does an aging population mean for private and public services? Lower birth rates coupled with growing numbers of seniors in Western Canada’s population may mean fewer schools and lower domestic demand for post-secondary seats. It will also inevitably lead to increased demand for health-care services, long-term care homes and related infrastructure to care for an older population. Yet these services depend on government funding generated by income tax and sales revenue—the very taxes that rely on employment income and consumer spending. What happens to this balance when there is a greater proportion of the population retired than actively employed?

Between lower birth rates and a larger number of seniors, the one advantage of the changing trend in age demographics means that there will inevitably be fewer grandchildren per grandparent – a greater opportunity to really spoil those kids.