Over the past 50 years, the story of the “Last Best West” has shifted from one of unexplored promise to becoming a force to be reckoned with in Canada. Political battles have been fought, industries have flourished, and populations have expanded across the western provinces. From it all emerges a compelling story of the diversity, growth and prosperity of Western Canada’s population.

While the economy has ebbed and flowed, the number of people who live in the West overall has grown exponentially since 1971. The population of Manitoba, Saskatchewan, Alberta and BC together has increased by 107.8% since 1971, growing to 12.1 million from 5.8 million over the past 50 years.

What does it mean for Western Canada – and what can be expected over the next 50 years?

In the 1970s, workers flocked out West, drawn by the promise of prosperity from the booming oil and gas sector; meanwhile, a more welcoming immigration policy that moved past a darker history of head taxes and internment brought a new wave of Asian immigrants.

For the first time since Confederation, in the 2016 census Manitoba, Saskatchewan and Alberta had the highest growth rates in the country.[3]

The population change in Western Canada is noteworthy for more than just the records it broke in the past. The growth over the past 50 years is set to continue over the coming decades. It is expected that by 2043, the Canadian population will reach around 46.5 million according to medium-growth scenarios.  While various factors can change the course of these projections (immigration slowdown during the pandemic, structural changes in our energy systems) continued population growth is predicted for Western Canada; medium growth projections estimate the region’s population will sit just under 16.6 million.[4] Even with complicating economic and social factors at play, the forecasts project that Manitoba, Saskatchewan and Alberta and BC will each witness an even greater increase in their respective share of the Canadian population.

An important shift has occurred in Canadian federalism. In 1971, the need for representation and increased clout for the West was top of mind, the exact sentiment in fact, that led to the creation of the Canada West Foundation. In 2021, the frustration felt in the West of not being heard loud enough in Ottawa continues. In the coming decades, Ontario and Quebec will continue to be the most populous provinces in Canada, however, the combined population of Manitoba, Saskatchewan and Alberta are projected to be slightly larger than Quebec’s population in the coming years. [5],[6] What this will mean for representation in federal politics is unclear.

Exponential growth in Alberta and B.C.

British Columbia and Alberta populations have grown 129.7% and 165.8% respectively in the 50 years since 1971. Despite the ups and downs of the oil and gas industry, Alberta has managed to maintain a first-place spot among the 10 provinces when it comes to year-over-year growth. The province has grown to a population of more than 4.4 million from 1.7 million in 1971.

Whether Alberta can maintain that momentum as economic growth slows will remain to be seen. Without prospects of major new oilsands projects in the foreseeable future, Alberta may not hold the same allure as years past.

Compared to Alberta, British Columbia experienced a slightly smaller increase in population over the last 50 years. As a heavy hitter among the provinces both in terms of rates of immigration as well as interprovincial (the highest interprovincial migration rate, in fact, among all the provinces), British Columbia is home to 13.5% of the Canadian population, increasing from 10.4% in 1971 (See Figure 2.3).[7] While issues such as housing prices, especially in the Greater Vancouver region continue to be a barrier to entry, the province is overall well-positioned for continued population growth in the years to come, with a steady stream of newcomers to the province.

Figure 03: Per cent change in population, per province, since 1971 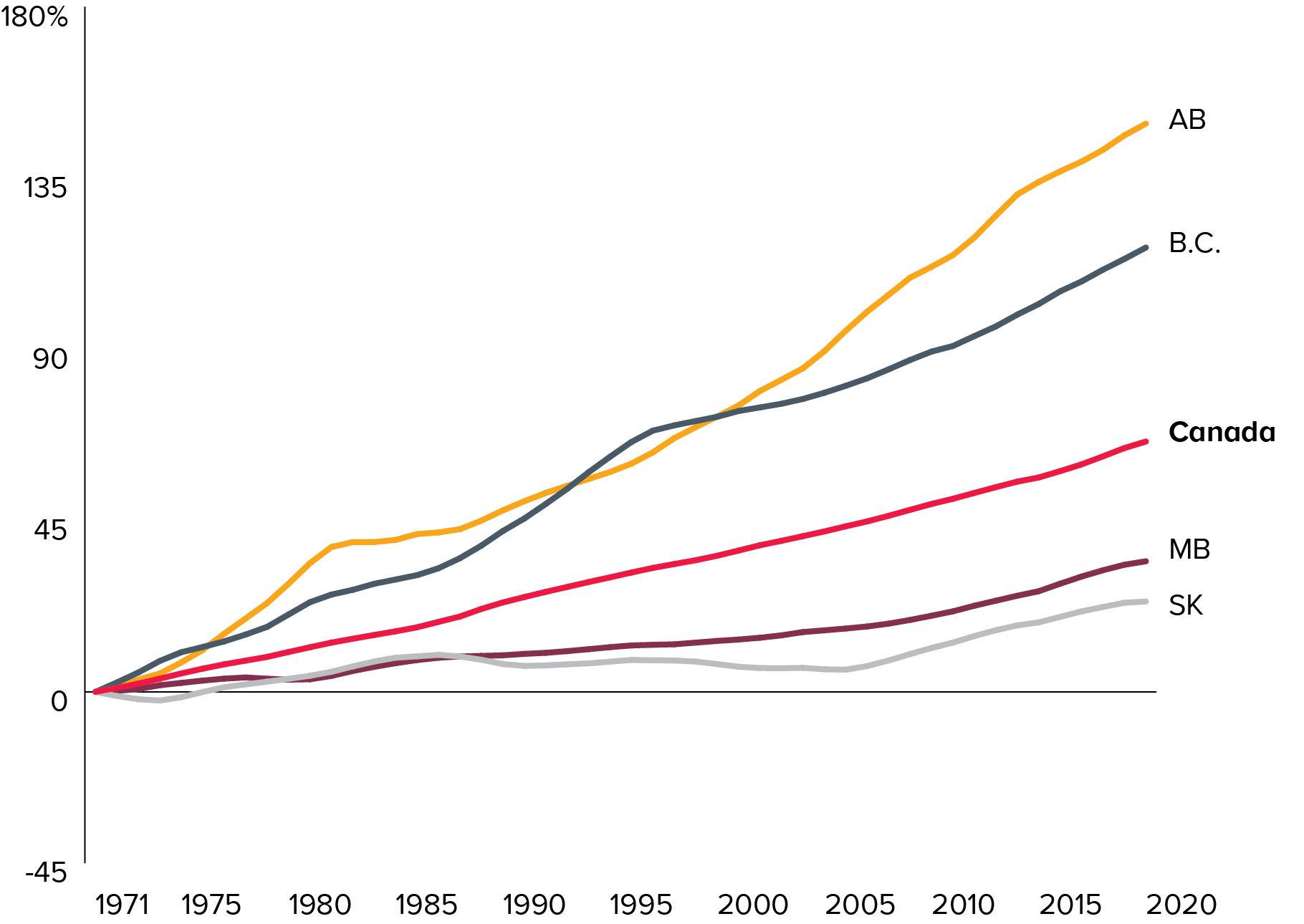 While not as massive as the changes experienced to their west, Saskatchewan, and Manitoba each respectively reached an important milestone over the course of the past 50 years—cresting a provincial population of 1 million. The overall population number has experienced ups and downs since 1971, at times reaching the one million milestone before slipping below again; the fact that these two Prairie provinces have maintained growth over the past few years should not be overlooked. In fact, it was the first time that both provinces posted consistent positive growth over the span of 50 years, as compared to the growth in the 50 years prior to 1971.

In Saskatchewan, similar to Alberta, growth of a resource-intensive economy was integral to the province to weather economic storms, particularly during periods such as the late 1980s and early 1990s, when the province’s population declined. Between 1988 and 1991, Saskatchewan consistently posted population losses for a total decrease of 2.5% in population size.[8] In recent years, Saskatchewan has enjoyed a new growth spurt brought about by increasing levels of immigration, a trend that holds promise to continue to reinvigorate the population size in the province in years to come.

To the east, Manitoba reached an important milestone in 2016, when for the first time in 80 years, the province experienced a growth rate higher than the national average. This feat capped a trend of slow population growth within the province over the past 50 years. A younger-than-average population is due in large part to the strength of Indigenous communities in Manitoba which have a higher-than-average birth rate. This key factor, in combination with new waves of immigration, will be important in the continued growth of the province.[9]

The explosive growth of the Western Canadian provinces has been truly remarkable. Exponential growth over the past 50 years in Alberta and British Columbia tops the charts across the nation; whether the growth will be sustainable given uncertain economic factors remains to be seen. Saskatchewan and Manitoba are doing well growing their population base, reversing years of negative population change.  As a whole, the growth of the West points to changing dynamics within Canada. Another feature in this series will explore the implications of population change on political change.

Friesen, Joe and Tom Cardoso. “Census 2016: Western provinces’ populations are the fastest-growing in Canada.” The Globe and Mail. https://www.theglobeandmail.com/news/national/census-2016-statscan/article33931243/.