In this edition: Waiting on Huawei, Chinese investment in Canada slumps, and lessons from the Canada-Cuba relationship about how to respond amid U.S. pressure.

“The whole affair threatens to demolish Canada’s carefully built relationship with China, with enormous consequences. China is Canada’s second-largest trading partner, with total trade between the countries growing from $11 billion in 2001 to $64.4 billion in 2016. Eleven per cent of recent immigrants to Canada are from China, making it the third-largest source of new Canadians behind India and the Philippines. Almost a third of Canada’s 500,000 international students—who contribute more than $15 billion to the economy annually—are Chinese.” – Maclean’s, February 4

The biggest story of the last two weeks is the continued high tensions between Canada and China, which stemmed from the detention in Vancouver of Huawei CFO Meng Wanzhou, upon extradition request by the United States. (For more details, check out these two China Briefs).

In the last few weeks, little has changed: Meng is still under house arrest in Vancouver, awaiting the extradition trial; two Canadians who were arrested under dubious circumstances (and probably in retaliation), Michael Kovrig and Michael Spavor, remain in Chinese custody; the Canadian sentenced to death in China, Robert Schellenberg, has not had his sentence commuted; and rhetoric exchanged by the countries remains icy.

The story has remained largely unchanged. However, there were a few pieces in the last few weeks that illuminate where we are at with China further:

• Canadian canola traders are seeing a slowdown in canola shipments to China (by far Canada’s largest market). Since Meng was arrested in December, “cargoes of Canadian canola have taken longer to clear Chinese customs and GMO permits needed to import genetically modified crops, including canola, became more difficult to obtain, traders said. Back in Canada, canola stocks piled up to a record-high level at year-end.”

• Even though there have been high levels of tension at the political level, Canadian products – like seafood and Canada Goose jackets – remain popular.

• However, Chinese companies are currently less likely to buy Canadian assets, due to the political climate.

• The Moody Credit Agency has warned that if China pulls its students out of Canadian post-secondary institutes, there could be serious cash problems for some schools. Moody’s specifically cited the Universities of British Columbia, Toronto, and McGill.

This long read from Maclean’s provides a detailed overview of what has happened with China and Canada since Meng’s arrest.

• Diplomatic tensions over Huawei threaten expanding B.C. trade with China (Vancouver Sun, January 29): B.C. does the most trading with China of all the provinces – this article looks at what could happen to its expanding trade there.

In the Hill Times, our Director of Trade & Investment Carlo Dade discusses how Canada will be able to emerge battered but intact from the feud with China intact – by looking to how Canadian officials deal with managing U.S. attempts to enforce its economic embargo measures on Cuba on Canadian companies. Key takeaway is that there is no outcome for Canada that does not anger both China and the United States.

• Comments from various U.S. government officials and experts about the outlook for U.S.-China talks have alternated between gloomy and optimistic. Last week, the American National Economic Council Director Larry Kudlow said that the U.S. and China are still a “sizeable distance” apart in their trade talks, sending stocks and spirits tumbling.

• On a positive note, Canadian lumber companies have been shipping more lumber to China, because of Chinese tariffs on American lumber.

• Former Canadian Minister of Foreign Affairs Peter MacKay has said that Canada is between “the proverbial rock and a hard place,” and that he fears Canada faces “further economic retaliation.”

• This piece looks at money laundering in China – and how it impacts countries like Canada.

• This op-ed in the Ottawa Citizen lays out a path for a better relationship with China, based three elements of Chinese government behaviour: distraction, projection, and respect.

• There have been reports that the agribusiness sector in China is in “deep financial trouble,” as companies face rising debt and a shrinking labour force (as people move to cities). 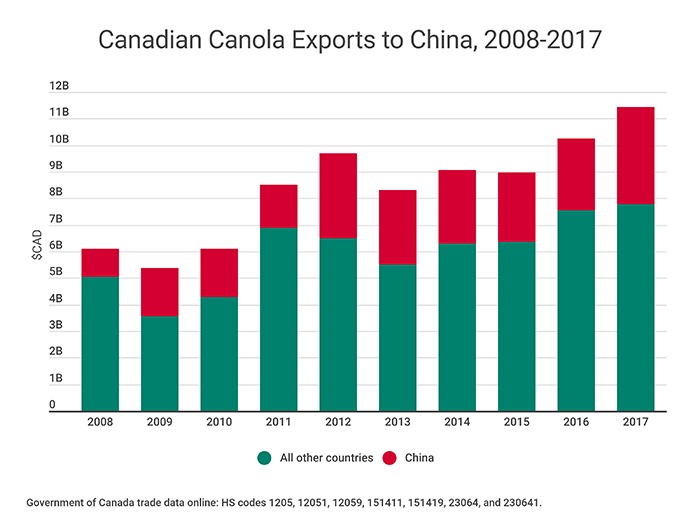