In the year since the China Brief launched, the relationship between China and Canada has been on a rollercoaster. This happened as economic and political worlds collided between the U.S. and China, with major implications for the West.

The next year will see the federal and provincial governments grapple with how to deal with China, Canada’s second-largest trading partner and a growing power on the world stage.

While it may be difficult to remember given the current challenges in the China-Canada relationship, the two countries enjoyed strong economic relations for most of the past year, and even hit some positive political notes (for example,  then-Heritage Minister Mélanie Joly and then-Agriculture and  Agri-Food Minister Lawrence MacAulay came home with  deals designed to boost the economic opportunities for the industries in their respective ministries).

In the last several months, the relationship between Canada and China has been marked by increased political tension. In May 2018, the federal government blocked the takeover of Aecon, the Canadian construction giant, by a Chinese state-owned enterprise, citing national security concerns. The relationship then went into freefall with the arrest of Huawei CFO Meng Wanzhou by Canadian officials upon extradition request by American officials. This resulted in bombastic rhetoric from the Chinese government directed at Canada, and the arrest of two Canadian citizens (on spurious charges) in retaliation.

Chinese government retaliation to political events appears to now include economic tactics. At the end of March, the Canola Council of Canada announced that “Chinese importers are unwilling to purchase Canadian canola seed at this time.” Canola is an economic powerhouse for the Prairies, and China is the largest buyer of Canadian canola; last year it bought more than $4 billion of Canada’s total $11 billion in canola exports. Other agriculture exports have since been hit; peas, soybeans, and pork are all being partially blocked or delayed in some fashion.

To make matters worse, what started as a trade spat between China and the United States has become a full-fledged trade  war – with Canada caught in the crossfire between its two biggest trading partners. American tariffs against steel and aluminum – aimed primarily at China, but affecting producers around the world – had a chilling effect on the industries in Canada. Meanwhile, tensions linger over whether Huawei will  be permitted to participate in building Canada’s 5G network.

Canada is in a difficult situation with China. With the extradition trial of Meng Wanzhou (which may take months) set to begin in September, expect to see more pressure placed on Canada, politically and economically.

The coming months will have far-reaching implications for the Canada-China relationship. An uphill battle is likely: Chinese officials are reportedly ignoring all overtures from the Canadian government, there is no Canadian ambassador in China, and China’s ambassador in Canada is done at the end of June.

There has been no visible progress made by Canada on the China conundrum. Clearly, the current Canadian approach to the relationship with China is not working.

There is no single, simple answer to how to get the Canada-China relationship right (see the recent Canada West Foundation policy brief on what specifically can be done on canola). Canada is so much smaller than China, and relies much more on China than China does on Canada. But Canada does have some options: in order for policy-makers to choose the right ones, they need to ask themselves these questions:

• What can be done to help those hurt by China in the  short-term? China has done some damage to specific  groups of Canadians – particularly canola farmers and crushers – and could do more damage before the current dispute is resolved. It is essential that whatever is done  to help is based on a thorough understanding of the exact damage, backed up by data.

• What are ways to protect Canadians from future disputes with China? Disputes with China have happened before, and are almost guaranteed to happen again. Policy-makers need to determine how to best plan for and create contingencies for such events.

• How do we protect Canadian trade interests from fallout over political issues? In Canada, and in many western countries, political and economic interests are typically kept relatively separate (although this is changing in the United States). One of the most pressing questions for policymakers is how to deal with bigger, more powerful countries using economic tools to pressure Canada for political ends. 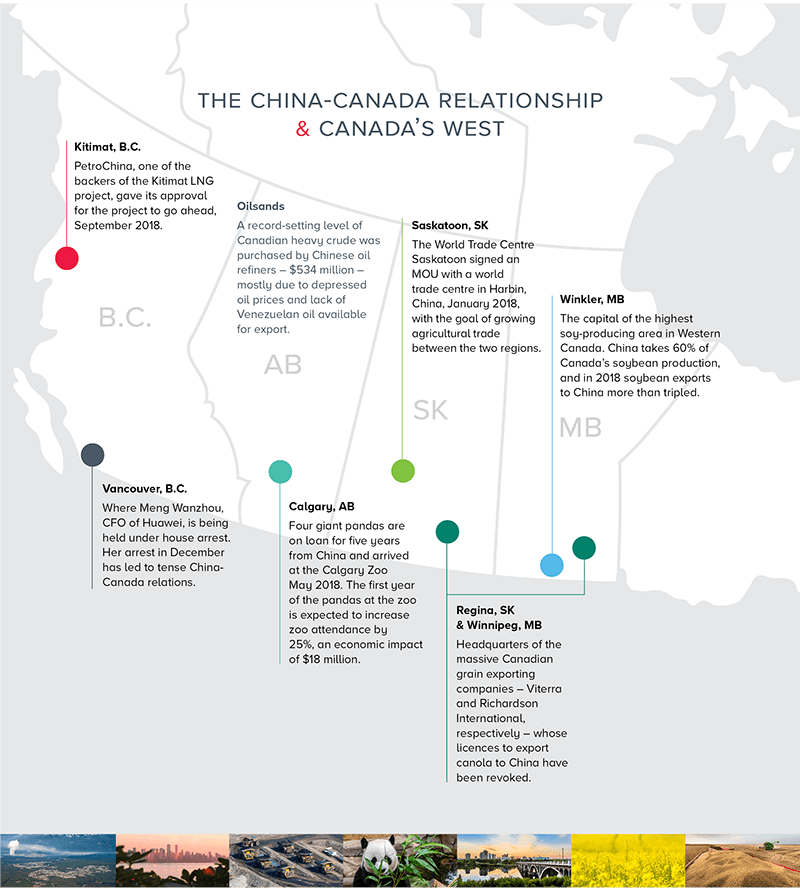 What is one of the best methods Canada can use  to improve its economic relationship with China?

But exporters and governments have misunderstood or simply ignored the risk that has always been associated with the opportunities in China. With canola, that risk has manifested itself four times over the past decade. A country that can make a political decision to suddenly import more canola can just as easily decide to stop.

Canada is not going to walk away from China, but neither can the country continue business as usual. Canada is going to continue to trade, but that trade must be based on better understanding and pricing of the risk along with steps to mitigate it. The private sector and markets have not done this in the past. When Canadian producers rush back into China once the current canola spat ends, will they be ready?

One of the most important things to remember when dealing with the conundrum of the economic relationship with China is that the problems we  have are often not economic at all, but are a fallout from a political problem.

Perhaps more than any other powerful country, China uses economic levers to try to get what it wants politically. This is a challenge because Canada largely keeps the two realms separate. Any effective Canadian strategy going forward will have to acknowledge this reality, and plan accordingly. This will need to include a consideration of how to protect Canadians from fallout  (like with the arrest with Meng, Canada did not have much say in the matter), and a consideration of how Canada reacts politically to Chinese action domestically and on the world stage.

Until China and the U.S. strike a deal, Canadian trade will continue to be vulnerable. To strengthen long-term relations, Canada must identify trade priorities for China and how they complement Chinese domestic developmental goals. It must also determine trade and investment areas to protect. Contingency plans need to be developed now for when new political tensions arise.

As trade reliance with China grows, bilateral trade agreements provide more formalized structure to trade barring political tensions. But this could be at least 10 years away; Canada must learn from the challenges similar economies experienced negotiating  with China.

Engagement at the multilateral level is more powerful and beneficial for Canada to hold China accountable. However, the necessity for World Trade Organization (WTO) reform and adjustment in the global trading system will take time. Advocating positions that benefit advanced economies of similar size at the WTO is timely for Canada’s future engagement with China.

– Sarah Pittman is a policy analyst at the Canada West Foundation and the author of the China Brief, a compilation of stories and links related to China and its relationship with Canada’s West published online every two weeks. Subscribe at: cwf.ca/china-brief