SECOND IN A SERIES ON WESTERN CANADIAN TRADE

The last time a Clinton won the White House, the North American Free Trade Agreement was about to come into effect. NAFTA expanded Canada’s first ever trade deal with our largest partner, the U.S., to include Mexico.

Fast forward to today, when another Clinton is in the race to lead the world’s largest economy. But now, both presidential nominees in “the land of the free” are quick to criticize NAFTA and oppose the proposed Trans-Pacific Partnership trade deal. 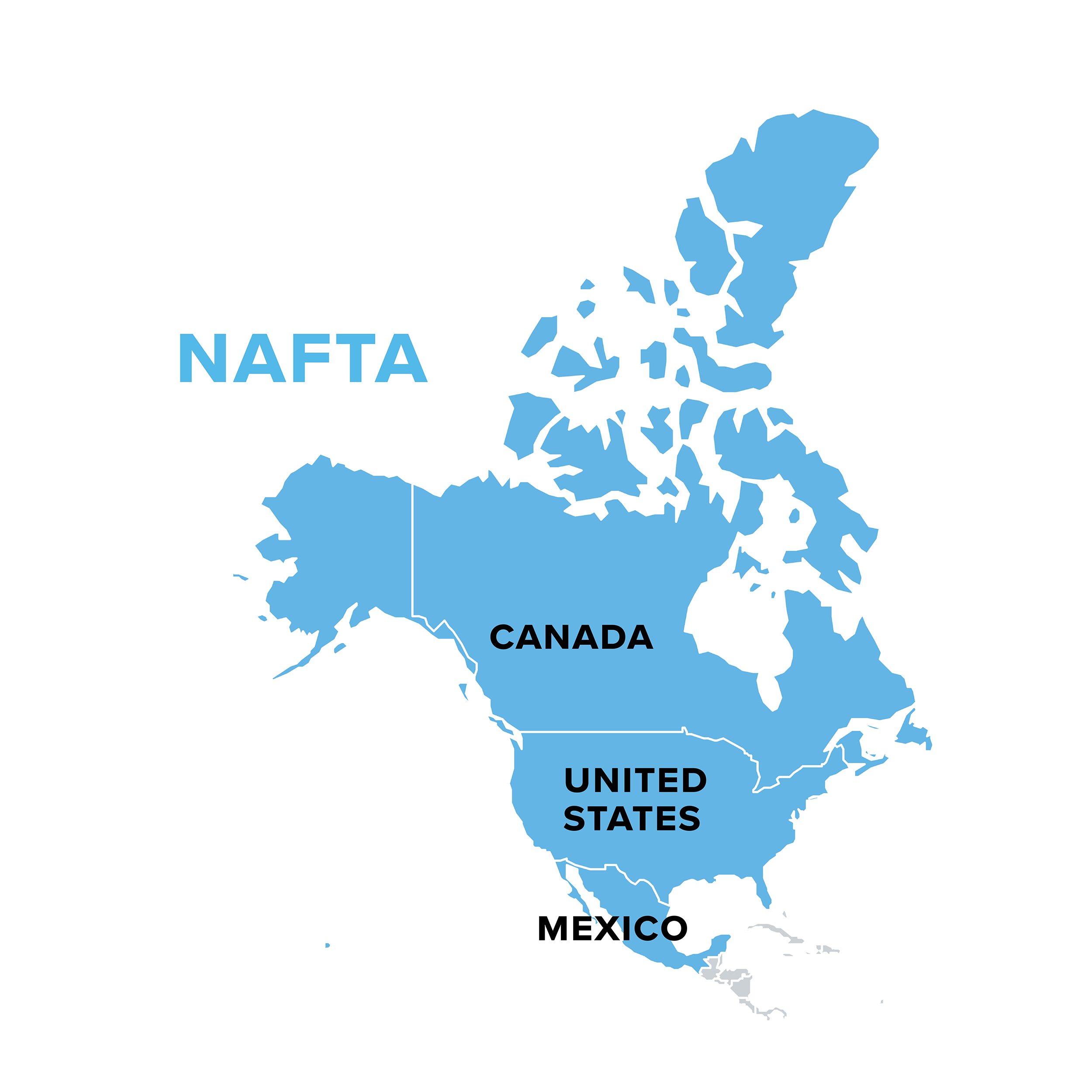 Canadians are justifiably concerned about the increasingly protectionist sentiments expressed by our biggest customer’s potential leaders. Since NAFTA came into effect in 1994, trade and investment levels on the continent have increased. The North American economy has more than doubled, and trade among the three countries nearly quadrupled.

Fourteen per cent of all goods traded globally were traded among NAFTA partners in 2014, second behind the European Union. Combined, the three countries have a GDP of nearly $21 trillion and a population of 477 million. The majority of both are contributed by the U.S.

Western Canada is a mix of provinces most and least dependent on NAFTA partners as export destinations. Alberta is the second most reliant Canadian province (behind New Brunswick), sending 88 per cent of its exports to the other North American countries in 2015 (mainly the U.S.).

56% of Saskatchewan exports in 2015 were bound for NAFTA markets. SK definitely a winner under #NAFTA. https://t.co/EimphNT589

B.C. is the only western province that is not a net exporter to NAFTA. Manitoba, which sends about 72 per cent of exports south in 2015, is in the middle of the provincial pack in terms of NAFTA trade. 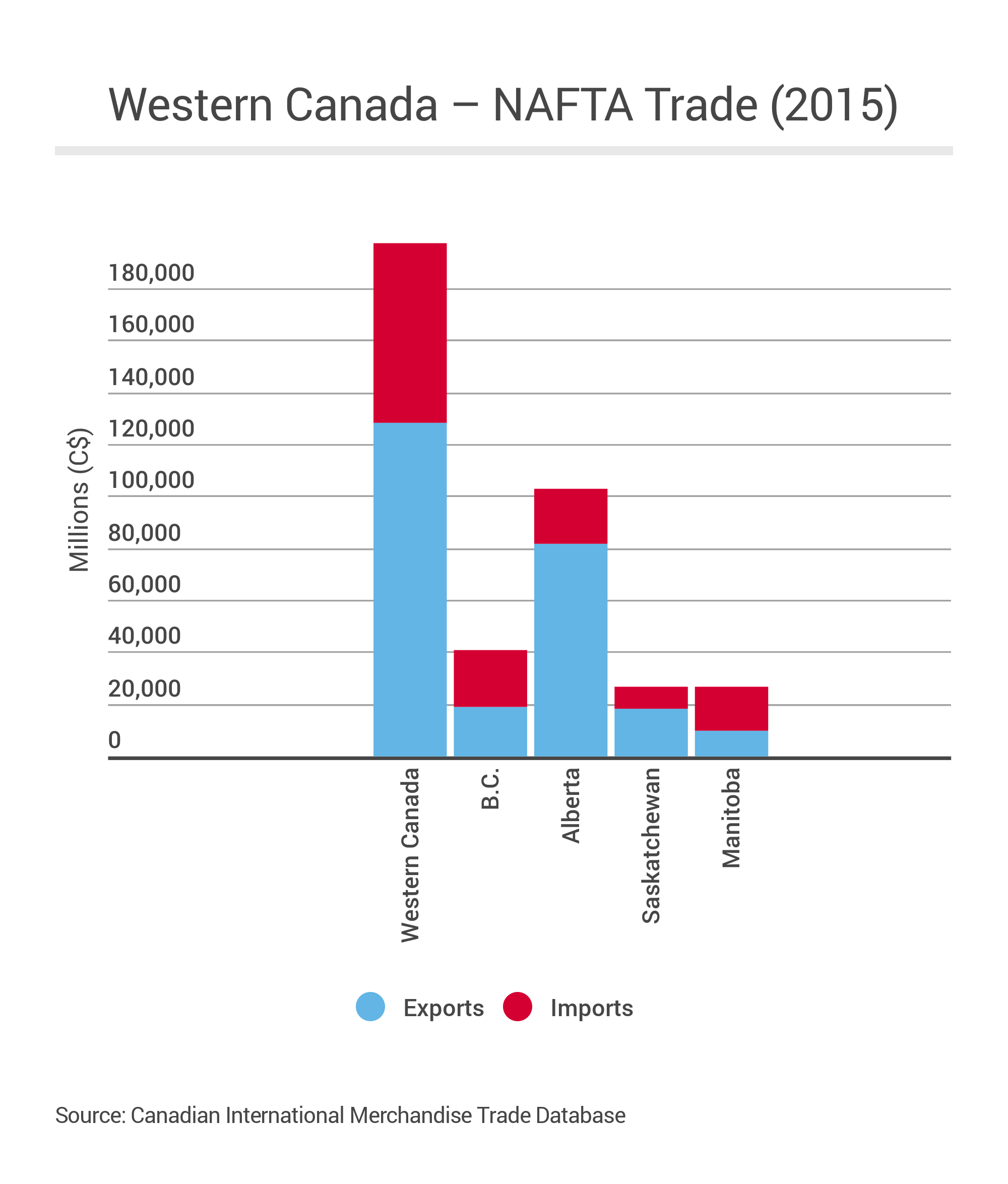 While we don’t have province specific data on trade in services, we know that about 50 per cent of total Canadian service exports go to the U.S (pdf).

NAFTA provides the opportunity for western businesses to build supply chains and access materials, technologies, investment capital and talent from anywhere in North America. NAFTA members exchange more than US$2.5 billion in merchandise per day.

Ninety-nine per cent of western Canadian exports to NAFTA members are shipped to the U.S. In 2015, the top three exports were

NAFTA ranks higher on competiveness indicators than any other trade bloc. Canada and the U.S. rank in the top 15 for all the indicators; Mexico lags farther back. 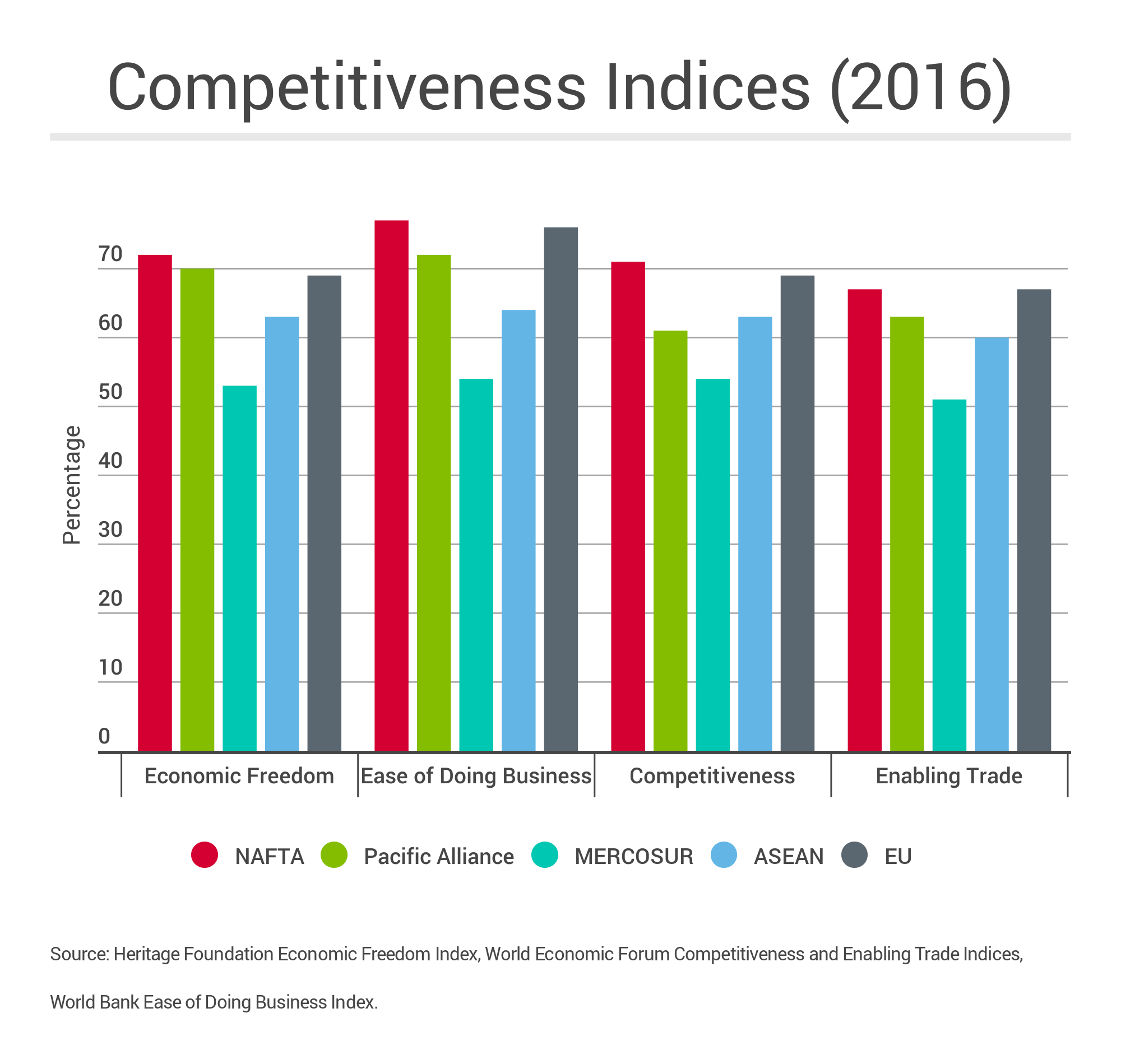 Canadians’ views on NAFTA have fluctuated during the 22 years it has been in place, yet there is still no clear majority opinion on the deal. According to polling done by Angus Reid, in 1993 (while the deal was being negotiated) 58 per cent of Canadians opposed it and 39 per cent supported it.

A more recent poll found 25 per cent of Canadians think NAFTA benefits the country, while 26 per cent thinks it has a negative impact. The rest of the population believes it hasn’t affected Canada either way (22 per cent), or are unsure about its impacts (27 per cent).

In the West, the number of Albertans and Saskatchewanians who see the deal as benefiting Canada outnumber those who think it has hurt the country by nearly 10 per cent. It is the opposite in B.C., a province with more manufacturing than the rest of the West. Manitobans were equally split in their opinions. 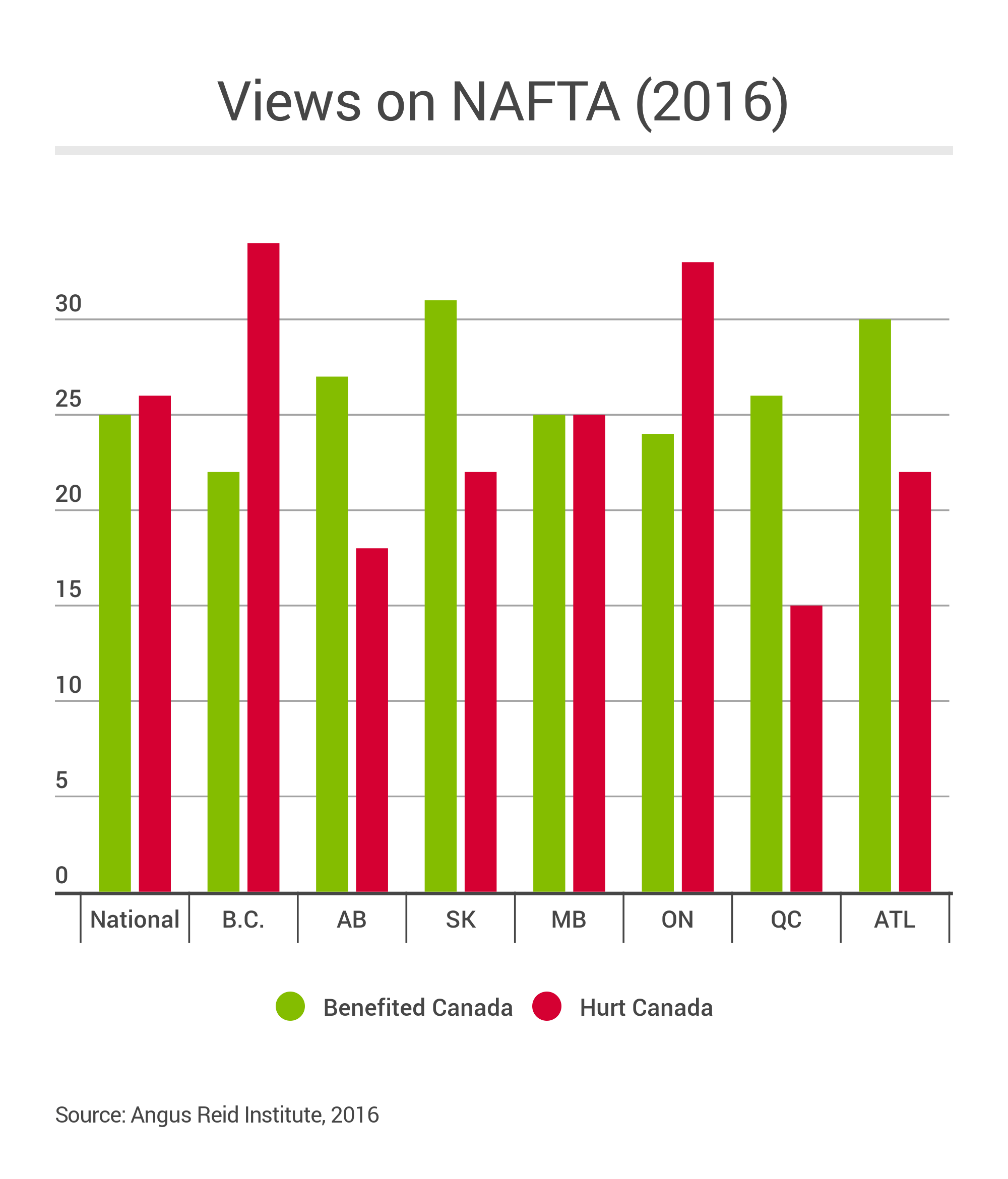 It is too soon to tell what the outcome of this fall’s U.S. presidential election will be. Let’s hope whoever the next president is, they tone down the protectionist rhetoric when the campaign is over. After all, the majority of Americans (51 per cent), still believe trade agreements are good for their country.

Canadians are hoping for the best, but need to prepare for the worst. As we increasingly build trade links with emerging markets like Asia, its important to continue to remain diligent about maintaining our trade relationship with our closest neighbours.

– Naomi Christensen is a policy analyst at the Canada West Foundation