FOURTH IN A SERIES ON WESTERN CANADIAN TRADE

Last in our series on western Canada’s relationship with major trade blocs, we explore trade with Mercosur – the Common Market of the South.

Canada has been engaged in exploratory trade discussions with this region since 2011. The South American trade bloc, created in 1991, is comprised of Argentina, Brazil, Paraguay, Uruguay, Venezuela and Bolivia.

Mercosur established the free movement of goods and services between its member countries. Agreements also guide currency exchange, investment and tax issues. Although a goal of Mercosur has always been to become a common market like the European Union, full economic integration has not been achieved.  Mercosur has its own Parliament, but it has no binding authority, serving more of an advisory role to Mercosur’s other decision-making bodies, such as the Common Market Council and Trade Commission. 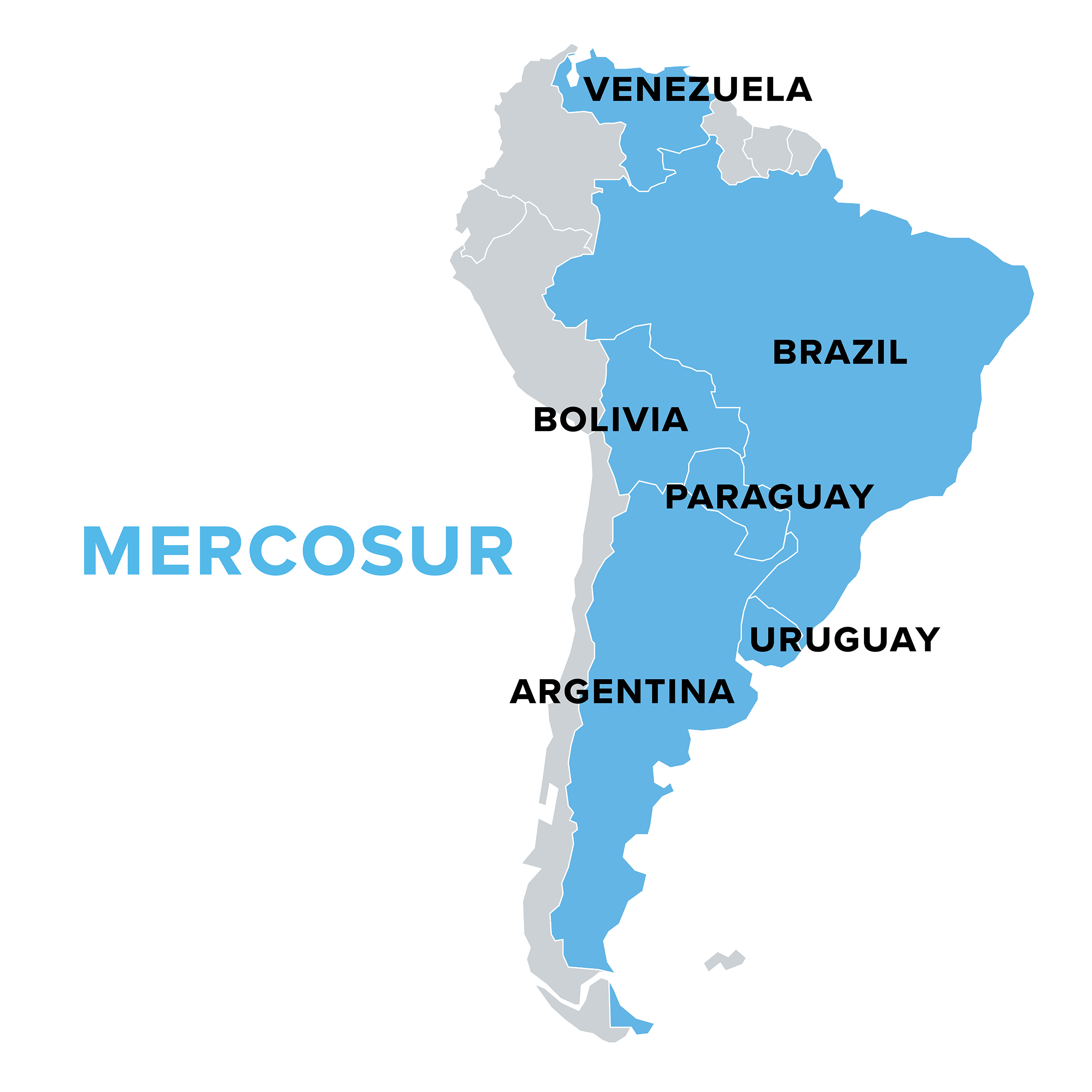 The combined GDP of Mercosur members is $3.5 trillion, similar to that of Germany, the world’s fifth largest economy. Brazil, Argentina and Venezuela are the largest economies – together accounting for 98 per cent of Mercosur’s GDP.

Mercosur’s population of 285 million is smaller than that of ASEAN, but larger than the Pacific Alliance. Seventy per cent of its population resides in Brazil. If it were a single country, Mercosur would be the fourth most populous on the planet, behind only China, India and the U.S.

Mercosur accounts for more than three quarters of economic activity in South America, and is the largest trade bloc in the region.

While Mercosur has several free trade agreements, it does not have any with Asia or the major economies Canada competes with in exports, such as the U.S. and Australia. This levels the playing field for western Canadian businesses trading with the bloc. Mercosur is currently negotiating a trade agreement with the European Union.

Trade with Mercosur is still minimal compared to other regions, accounting for only about 1 per cent of both exports and imports from western Canada last year. 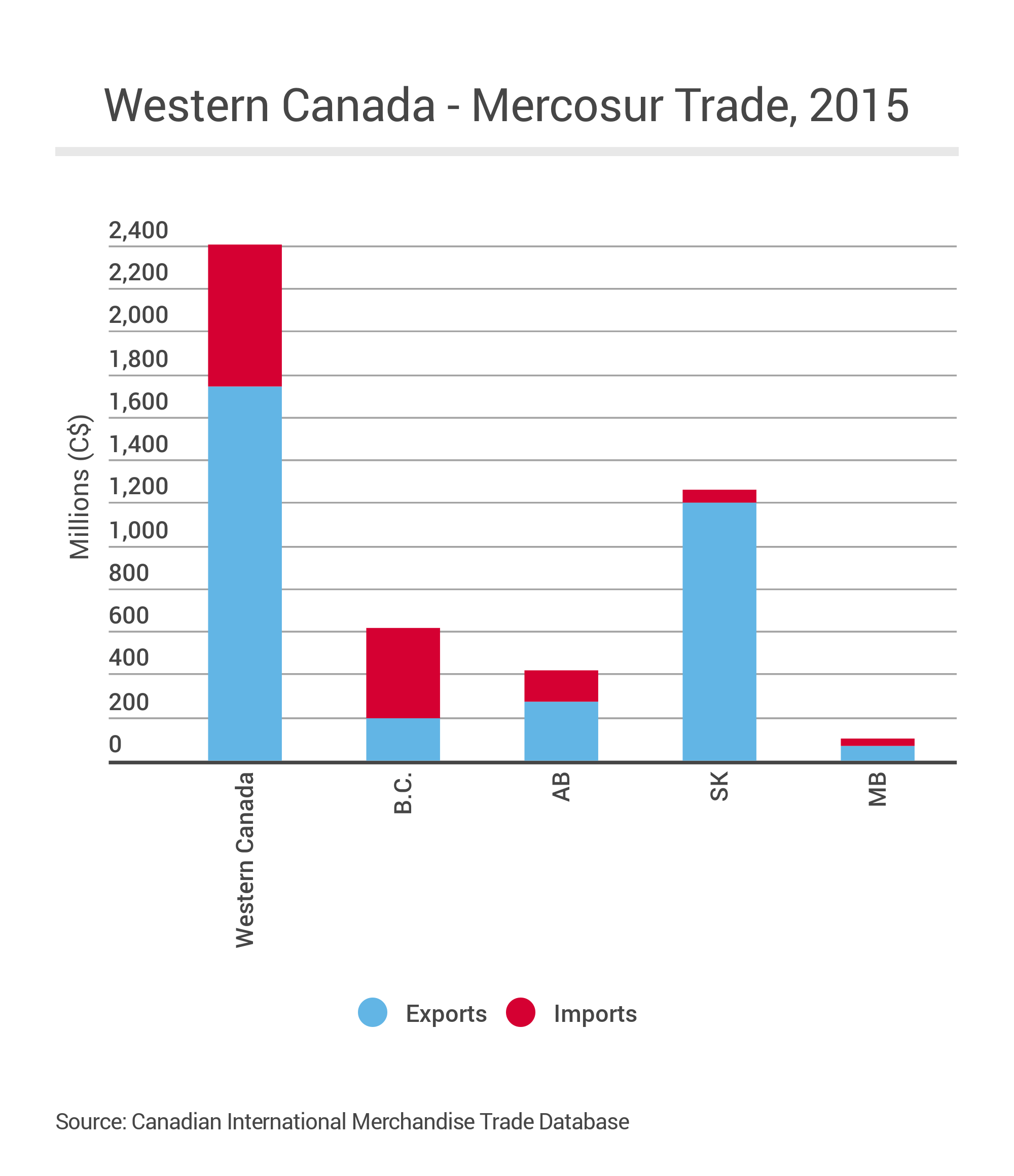 The top three western Canadian products exported to Mercosur are

As a major global exporter of grains and beef, Argentina is western Canada’s competitor in agriculture. However, there is an opportunity to increase agriculture sales to other Mercosur members; Brazil, for instance, is the world’s fourth largest importer of wheat.

Argentina’s new president Mauricio Macri, elected last year, campaigned on a platform of making the country more business friendly. This includes attracting foreign investment in the energy sector, which will be especially critical to developing Argentina’s shale gas plays – the second largest in the world. Both Argentina and Brazil import oil and gas equipment and services.

Mercosur scores lower on competitiveness indicators than other trade blocs. None of its member countries belong to the OECD. 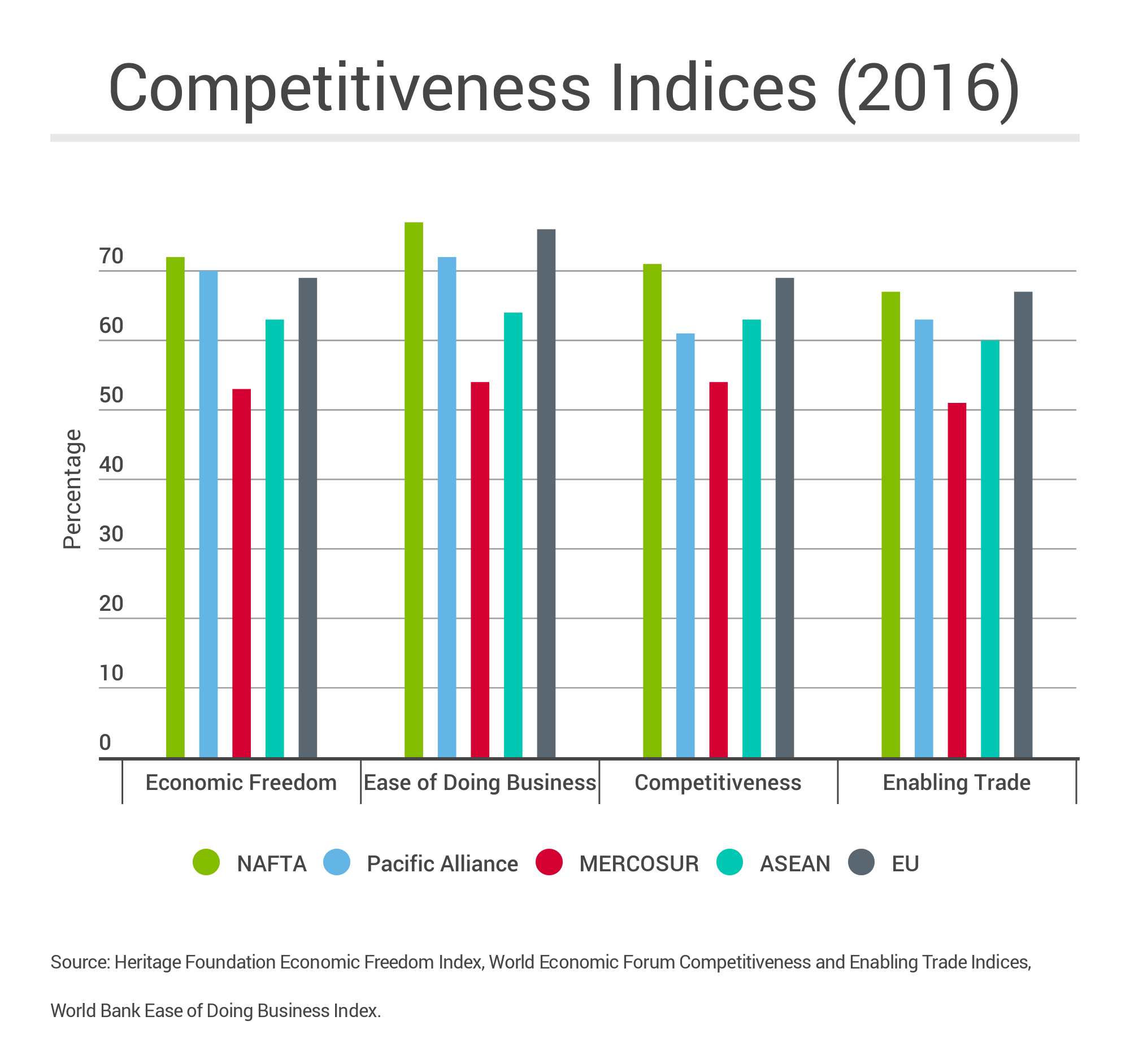 While Mercosur is not as important a trade bloc for western Canada as others, it is the dominant player in South America. With the middle class population in member countries projected to grow between eight and 16 per cent by 2030 (excluding Argentina, whose middle class already makes up 75 per cent of the population), export opportunities, particularly for agricultural products, could increase.

This is the last of a four-part series on western Canada’s trading relationship with global trade blocs. We’ve covered the Pacific Alliance, NAFTA, and the Association of Southeast Asian Nations. Next week we will wrap up the series.

– Naomi Christensen is a policy analyst at the Canada West Foundation