Potash Production on the Prairies: Saskatchewan’s Pot(ash) of Gold

By Marissa Dimmell and Taylor Blaisdell

In 1996, sylvite—better known as potash—was named Saskatchewan’s official mineral, a tip of the hat to an industry that had done so much for the province since its discovery in the 1940s. Potash production came into full force in the 1970s, playing a critical role in the province’s economy and establishing Saskatchewan as a world leader in the mining and exportation of this key resource.

Agriculture-powerhouse Saskatchewan may be known as the “breadbasket of Canada,” but it’s also a heavy-hitter when it comes to potash. Potash refers to potassium compound and potassium-bearing minerals—the most common being potassium chloride–used largely for fertilizer, as well as for some industrial applications including glass, ceramic, chemical dyes, synthetic rubber and other manufacturing operations. Canada is the world’s largest potash producer and exporter – with Saskatchewan home to  all of Canada’s potash mines.

Western Canada’s potash deposits occur in the Prairie Evaporite Deposit—the largest known potash deposit in the world, extending from central to south-central Saskatchewan and a few kilometers into Manitoba. The reserves are the result of the evaporation of an ancient inland ocean in the region.

Most of Saskatchewan’s potash deposits are located 2,500- 3,000 feet underground, with the reserves varying in depth based on their location in the province. Because of the varying depths of potash, different mining techniques are required, ranging from conventional mining (shaft based) techniques to solution-based mining, as well as hybrids of the two techniques. Recent innovation led by Western Potash Corp. has also led to the implementation of the selective solution mining technique. Most potash in Saskatchewan is in the form of potassium chloride, with the province’s recoverable reserves estimated to be over 100 billion tonnes.

Potash in Saskatchewan | Then and Now

In 1941, an exploration project near Radville in southern Saskatchewan looking for oil and gas found something unexpected instead: potash. Further discoveries identified the presence of large deposits—the largest in the world, in fact—throughout the province. The Potash Company of America became the first potash producer in operation in Canada in 1958, setting up shop in Patience Lake, east of Saskatoon—a mine still in operation today. Western Potash Corporation was not far behind, with its conventional potash mine opening its doors in 1961 near Esterhazy.

After wrestling with issues in the early 1960s with shaft sinking, potash mining soon made great strides in the 1970s, as 12 new potash companies set up shop in the province and 10 new mines opened their doors. Yet this progress was met with a critical problem: industry expansion had exceeded market growth and prices plummeted. With some mines on the brink of closure, the Saskatchewan government under Premier Thatcher put in place a series of measures to regulate the production and marketing of potash via a “rationing-pricing plan”— whereby all mines were given a production quota and a minimum price would be established. The strategy saw increased provincial participation in industry and importantly, greater revenue. Government intervention in the potash industry was initially met with resistance—including litigation—by industry members, especially after major tax increases. But the growth of public ownership of Saskatchewan’s potash resources marked an important change in the potash industry with the rise of two key players: the export company Canpotex in 1970 and the Crown Corporation Potash Corporation of Saskatchewan (PCS) in 1975.

From its establishment in 1975 to its privatization in 1989, the Potash Corporation of Saskatchewan—acquired through the negotiated ownership of four mines in the aftermath of the market crisis in the early 1970s— became a landmark entity in Saskatchewan’s potash industry— owning 40% of Saskatchewan’s productive capacity. During its lifetime and aided by good market conditions, PCS became a profitable operation that has played an active role in international industry affairs and growing Saskatchewan’s economy.

While profitable as a Crown Corporation, recurring negotiations regarding royalties and provincial revenue structures between the provincial government and industry—coupled with broader privatization strategies—eventually led to the privatization of the PCS in 1989. In the time since its privatization, PCS acquired another mine and expanded and diversified its operations into nitrogen and phosphorus production. But potash remains its strength. In 2018, PCS merged with Calgary-based agricultural company Agrium to form Nutrien—one of the world’s largest fertilizer producers and distributors.

Canpotex was created in 1970 by potash producers in Saskatchewan as part of its broader measures to create better organized production and marketing of potash. Twelve original shareholders, created Canpotex to develop new offshore markets, (outside of Canada and the US) and improve transportation efficiencies as well as economies of scale in the industry— a mission that remains the company’s main focus five decades later.

Since the start of operations in 1972, Canpotex has shipped and sold over 250 million tonnes of Canadian potash. In a contemporary context, Canpotex continues to be one of the largest potash suppliers in the world. Canpotex is Saskatchewan’s largest global exporter and is among Canada’s largest export companies, exporting roughly 12 million tonnes of Canadian potash to more than 40 countries annually— accounting for roughly C$4.3 billion worth of exports annually. The company’s head office is in Saskatoon, with sales offices in Brazil, China, and Singapore. Canpotex’s current shareholders are potash producers Mosaic and Nutrien.

Today, the 10 mines that opened in the 1970s still constitute the majority of Saskatchewan’s potash-producing capacity. Between its plentiful, high-quality reserves and efficient mining techniques, Saskatchewan offers the most sustainably produced potash with some of the lowest production costs in the world. Over the past few decades, Saskatchewan’s potash industry has rationalized into 3 main companies: Nutrien, K+S Potash Canada, and Mosaic Company. As of 2019, Saskatchewan is the number 1 potash producer in the world, accounting for 30% of world production.

Source: Canada West Foundation Estimate based on Government of Saskatchewan

Being the export-driven industry that it is, potash supports economic growth in Canada through employment, stabilizing the agriculture sector, and sustaining international trade. Dependable trade infrastructure remains key for the potash sector. 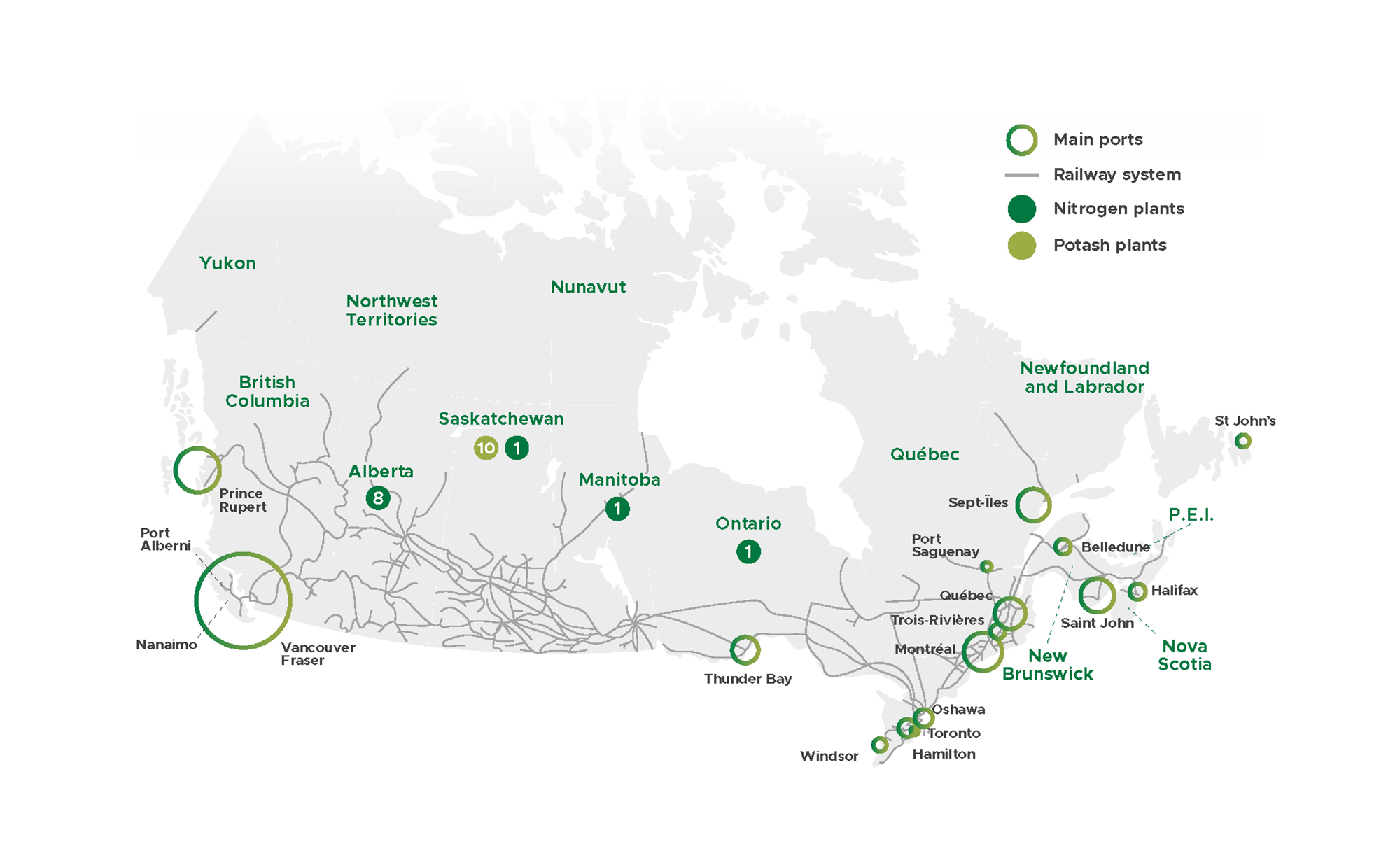 Most of Canpotex’s activity starts in Saskatchewan mines and moves West to coastal ports in B.C. and Oregon. The remaining potash is transported east to Ontario and New Brunswick, to later be passed through the Great Lakes. Roughly 650 mine-to-port trips are made yearly, with trains that can be up to 250 railcars long and have a potash capacity of 21,200 tonnes. This impressive capacity wasn’t possible until 1999 when Canpotex joined forces with Hamilton-based National Steel Car to create a potash-specific railcar that doubled the potash capacity from the existing railcars—which happened to be grain railcars.

In 2017, CP completed a new line of rail called the Belle Plaine subdivision, a 30 km line that connects the Bethune mine to existing CP tracks. Long-term shipping agreements with both CN and CP provide a variety of routes to market.

Over the years, Cando has created a niche in the Canadian potash industry. Annually, Cando moves upwards of 20 million tonnes of potash. And since partnering with Saskatchewan’s Mosaic, Cando handles 90 per cent of all potash produced in Canada. Providing rail services for six Saskatchewan-based mines run by potash leaders Mosaic and Nutrien, Cando’s success is a result of the close relationships the company has established over the years. Cando works very closely with not only potash producers but also rail counterpart, CP rail, which has granted Cando operating authority along the mainline subdivision between Esterhazy and Bredenbury.

Potash markets have been in flux for more than a decade—with potash prices reaching a record high in 2008 that has since been unmatched. While demand for potash has been steadily growing by 2% annually, some mines have been left with excess inventory and production capacity. Mosaic’s Colonsay, Sask mine, one such example, temporarily closed its doors in  January 2020 after having operated at modified capacity since 2016. The mine restarted its operations in August 2021. Even with these challenges, the industry has invested over $20 billion over the previous decade. Future growth in the industry is already underway with mining giant BHP Group’s August 2021 final investment decision to begin the first phase of its Jansen potash project, a project that has been deemed the “single largest economic investment ever made in Saskatchewan’s history”— valued at more than $12 billion.

As the global economy emerges from the pandemic and agricultural demand continues to grow, producers are seeing an increase in market demand and higher prices in summer 2021. Ever increasing demands for food as the world’s population grows— with some countries doubling down on efforts to ensure future food security through effective agricultural practices that include potash use— position the potash industry well in the years to come. Given the Saskatchewan potash industry’s ability to expand quickly to meet sudden increases in demand, the province is poised to continue to be a global leader in potash production and export.