The Potential for Geothermal Electricity in Western Canada

In the early 1980s, as energy prices in Canada skyrocketed, the hunt for innovative and alternative renewable sources was on. Geothermal emerged as a contender as the Ministry of Natural Resources and the Geological Survey of Canada began to explore its potential. But soon after as the price of oil normalized, the demand for alternative sources of energy dwindled, and Canada’s interest in geothermal diminished alongside.

Since then, countries around the world have developed geothermal electricity technologies. But the sector in Canada has been slow to catch up and only recently began to receive attention as new technology improved both economic and technical viability. Although geothermal energy is one of the oldest natural forms of power used by humans, it is often kept “below the surface” in conversations on renewables. Conversations about a cleaner, greener, and more efficient energy sector often conjure up solar or wind power. But geothermal is starting to get more attention, particularly in Western Canada where it has great potential.

In the past, geothermal heat sources have either been expensive to operate compared to existing electricity generation or provided inadequate temperatures to produce electricity efficiently. But that is changing. This Our West feature will outline Western Canada’s historic geothermal presence and explore the potential for its future. 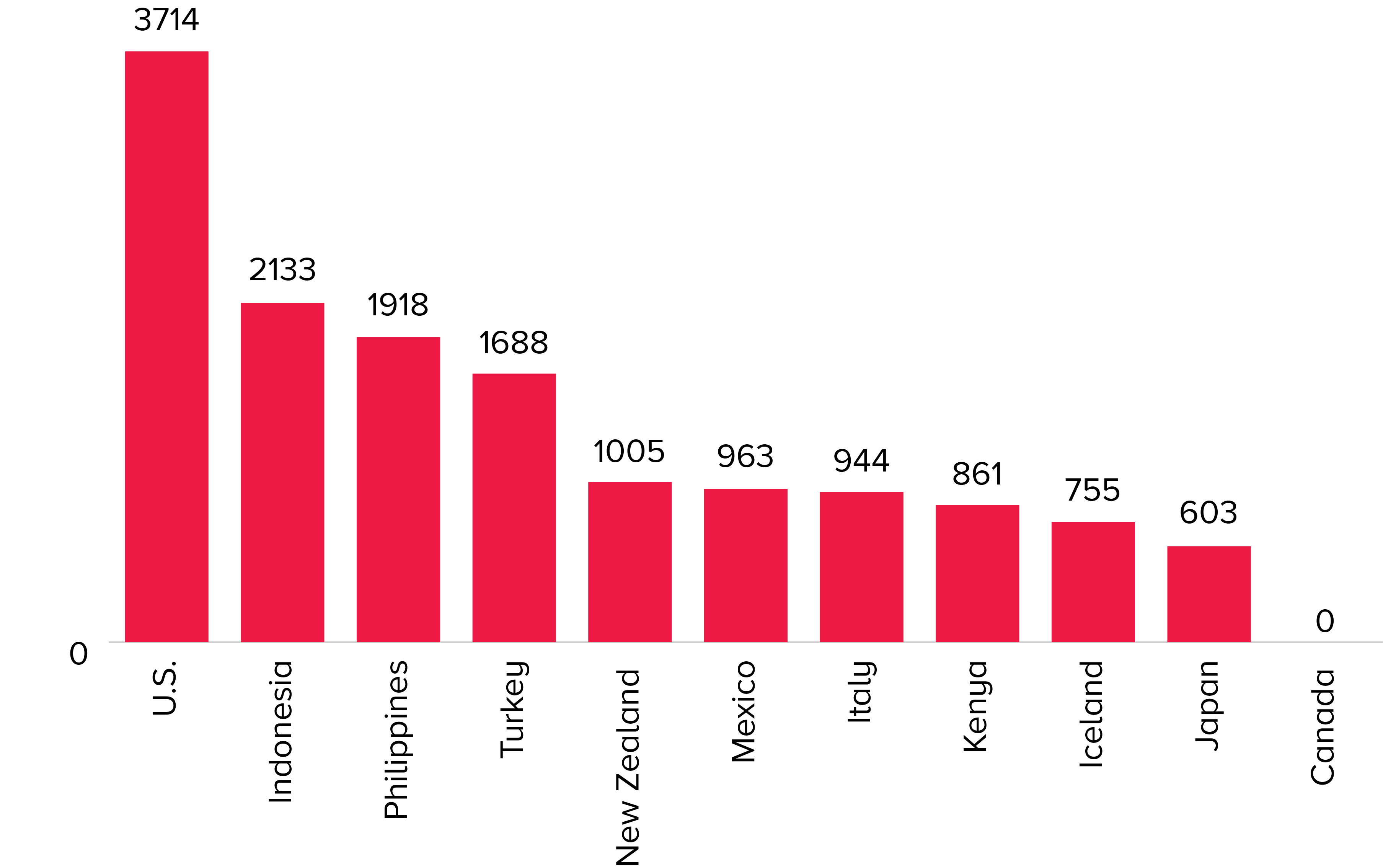 Geothermal energy—broadly explained as natural heat below the Earth’s surface—is generated in the core of the earth and radiates outward towards the crust. It is a resource that is constantly renewing itself, making it one of the most sustainable natural resources on the market. It can be used for direct heating or to produce electricity. There are three main ways geothermal energy can be obtained from below the Earth’s surface—sometimes as deep as 9.1 kilometers.

These power plants draw out underground stores of steam to a generator unit via an underground piping system.

This is the most common form of geothermal energy extraction. Reservoirs of high-temperature water (182 °C) flow up through underground wells. As the water rises to the surface and the air pressure decreases, much of the water turns to steam. Whatever does not turn to steam is injected back into the reservoir to undergo the process once again.

These two-circuit power plants operate with slightly lower temperatures (107-182°C) and use heat from the underground water to boil a working fluid—typically an organic compound like butane or pentane hydrocarbon. The first circuit pumps hot water through a heat exchanger before it returns at lower temperatures. The second circuit pumps a working fluid through a high-pressure heat exchanger where it is vaporized and transferred to an exit turbine.

As geothermal technologies continue to advance, innovators are pioneering new techniques that do not rely on either water or steam — unlike traditional geothermal powerplants.

Eavor-Loop™ is the world’s first form of clean, baseload, and dispatchable power. This entirely closed-loop system enables geothermal energy to be obtained with zero fracking, zero GHG emissions, zero water use, and zero earthquake risk. This process circulates a fluid through a closed loop of horizontal pipes, also known as a “radiator,” that collects heat from the natural geothermal gradient of the Earth. Plus, because this “radiator” is isolated from underground water sources, there is a much smaller environmental impact than traditional geothermal technologies that can deplete underground water sources or possibly cause aquifer contamination. In 2018, Alberta launched the Eavor-Loop demonstration project using existing leading edge horizontal oil and gas drilling technology and expertise. This project remains a testbed for innovations and other tweaks to geothermal tech. The firm is launching its first commercial operation in Germany.

The upsides and the downsides

Unlike solar, wind, and some hydroelectricity that are subject to volatile weather conditions to generate power, geothermal energy does not suffer from intermittency: it is generated at a predictable rate regardless of external variables. Similar to nuclear energy in its consistency, the reliability of electricity production of geothermal is 97%.

Next to nuclear power, geothermal energy is the least land-use intensive of all zero-emission electricity technologies, because the energy extraction takes place under the Earth’s surface through wells with comparatively small footprints. In the U.S., geothermal land-use efficiency is projected at 7.5 km2 per terawatt/hour (TWh) by 2030. This is impressive compared to solar energy that requires double the land per generated TWh and wind power that requires roughly ten times as much land.

Source: Climate Change Impacts in the US of 2014

Although geothermal energy possesses impressive renewable potential and promising ability to change the energy sector, it does have downsides. First, high upfront costs pose challenges for the industry. According to a 2018 financial analysis coming out of American firm Lazard, upfront costs to construct a geothermal plant range from $4,000 USD and $6,000 USD per kilowatt-hour (kWh). Although geothermal may have significantly higher upfront costs compared to other renewable sources of energy, the cost to fuel them in the post-construction phases is much lower, with operation costs that range from $0.01 to $0.03 per kWh.

Second, heat at reachable depths is not available everywhere. The resource is extremely location-dependent and requires significant drilling infrastructure. But luckily for Western Canada—and Alberta in particular—this particular downside is mitigated thanks to wellbore information and preexisting infrastructure from the oil and gas industry. In recent years, several Western companies have developed pilot projects that repurpose infrastructure and skills from oil and gas. Plus, the Alberta government’s 2021 budget allotted $28 million for geothermal resource development.

Geothermal energy can typically only be produced in certain geographical hot spots. The most active geothermal zones are predominantly found along tectonic plate boundaries—the Circum-Pacific Belt, also known as the “Ring of Fire”. This horseshoe shaped region is home to 75% of the Earth’s volcanoes. Although geothermal energy never runs out, these geographical limitations make it less viable for wide-scale energy production. Fortunately for Western Canada, geography and geology are on our side.

The Ring of Fire lines the edges of the Pacific Ocean 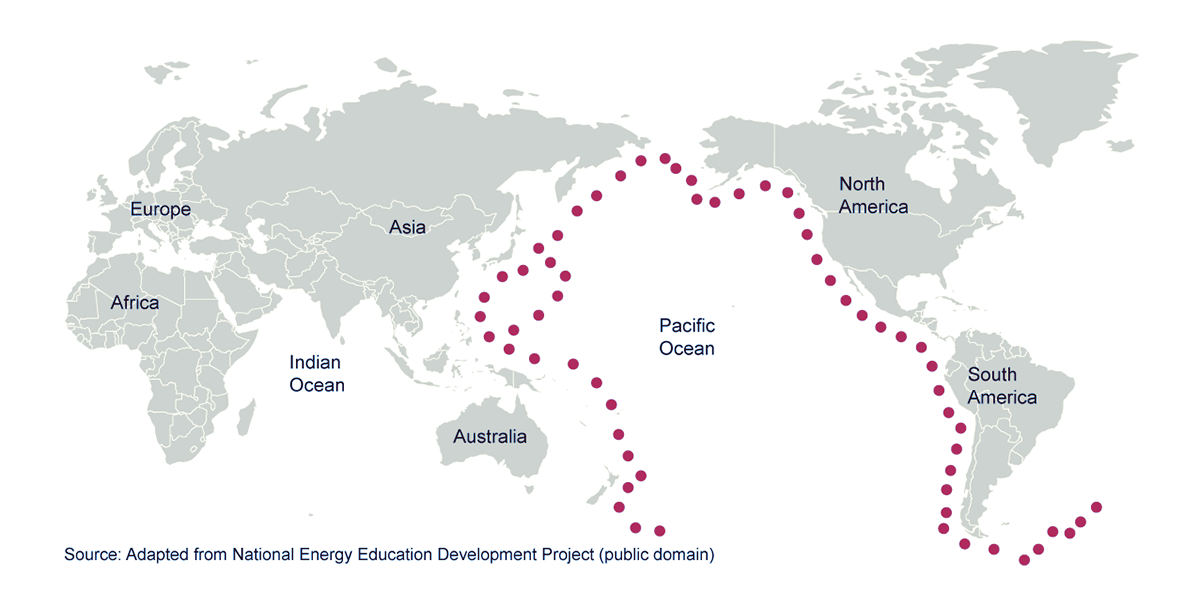 Canada is one of the only countries along the Pacific Rim that has yet to capitalize on its geothermal potential and in the Western provinces, it is still very much in its developmental stages.

Because British Columbia’s coast is directly situated on the Pacific Ocean’s “Ring of Fire,” its geothermal potential is enormous. However, while prospects for geothermal power plants have been identified, official commercial construction has yet to start. At the moment there are 16 prospective sites, and as of late 2020, 127 explorative wells have been drilled in the province.  A promising milestone for geothermal development is the, recently completed, $41 million Indigenous-led Clarke Lake Geothermal Development Project—funded by Natural Resources Canada, B.C. government, Indigenous Services Canada, and Western Economic Diversification Canada. This project is expected to produce enough electricity for up 14,000 homes and reduce greenhouse gas emissions by 25,000 tonnes annually—the equivalent of taking 5,000 cars off the road. Plus, on Mount Meager—a group of volcanic peaks in the Pacific Mountain ranges of B.C.—an exploration that started in the 1970s and was quickly dissolved due to upfront costs has since been revived as the world’s demand for alternative energy sources soars.

Being a neighbour of B.C., Alberta also has favourable traditional hotspots for geothermal energy extraction, but there is also substantial potential for applications in slightly lower temperature regions using new technology. And thanks to the robust oil and gas sector in Alberta—including technology and transferable skills—the cost of geothermal energy can be significantly reduced through repurposing skills, infrastructure, and well data. A critical oil and gas technology that can be borrowed by the geothermal sector is multilateral horizontal drilling. Advanced horizontal drilling techniques enable the creation of closed-loop systems that travel some distance underground to allow greater contact between the circulating fluid in the pipe and underground heat – central to the geothermal process.

Here are some of the current and completed pilot projects and research groups in Alberta:

In Saskatchewan, the geothermal industry has achieved milestones not only on a national level—but also on the global stage. Last year, a Saskatoon-based company drilled the world’s first 90-degree horizontal well for geothermal power. The privately-owned company DEEP is continuing to develop the technology that will power upwards of 5,000 households and have a long-term baseload power supply—in other words, 24/7, 365 days a year.

Although Manitoba does not host any geothermal power plants, Manitoba is one of the largest single geothermal users in Canada. The province is the Canadian leader in geothermal heat pump installations, which differ from power plants in that they simply move heat into or out of the ground via pumps. This technology is predominantly used for the heating and cooling of residential homes and commercial buildings. While geothermal power plants are sparse in Canada, demand for the product certainly isn’t, and Canadians are finding innovative solutions to use these resources more and more—just another reason for Western Canada to prioritize geothermal development.

The opportunity for geothermal energy development in Canada is a golden ticket that is attracting interest from companies and governments. The opportunity does not come without its challenges, however; from outdated policies to competing cheaper energy alternatives, the geothermal sector continues to face stumbling blocks. But with geography, infrastructure, and innovation on Western Canada’s team, these stumbling blocks are surmountable. To enable the implementation and expansion of geothermal in Canada, regulatory frameworks across Western provinces must transition from a restrictive and outdated view to one that enables both today’s and tomorrow’s technologies. In December 2020, Alberta passed Bill 36: Geothermal Resource Development Act dedicated to supporting a regulatory framework for geothermal development in Alberta. As geothermal electricity opportunities arise, western provinces are moving in the right direction towards regulatory adjustments and policy implementation. And despite various challenges, innovators and investors are now showing that this greener, cleaner, deeper energy dive could very much be a part of Western Canada’s energy future.

Over the next 50 years, with demand for alternative energy sources set to grow, geothermal is set to move from promising to actually providing electricity for Western Canada. 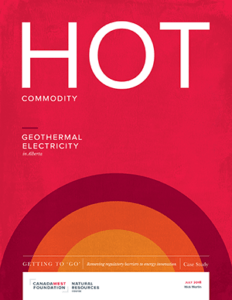 See our 2018 report on the importance of strengthening and clarifying Alberta’s complex regulatory framework for geothermal electricity which formed the basis of our recommendations to government.