Last week, Manitoba Premier Brian Pallister unveiled his government’s Made-in-Manitoba Climate and Green Plan that lays out how the province will reduce climate changing emissions over the next five years, including a price on carbon.

The plan is a big step in the right direction for a province that fought against a federally imposed price on carbon until only recently, when the legal opinion it requested concluded it was likely a losing fight. But the Pallister government did not give the federal government everything it asked for. Instead, it is opting to set a flat $25 per tonne carbon price instead of the federal pricing scheme that starts at $10 in 2018 and ends at $50 in 2022.

Manitoba’s choice to implement a carbon pricing scheme is a smart one. A price on carbon is the most efficient way to reduce emissions. It provides clear financial incentives to reduce emissions without prescribing how those reductions should occur. This allows businesses and households to make their own decisions and ensure that cost-effective emission reductions are harvested first. Manitoba’s choice is also smart because by implementing its own plan, the province retains control over how the resulting revenue from a carbon levy is used. If Manitoba opted for the federal back-stop plan, the federal government could end up making these decisions.

On top of the smart choice, the plan’s designers also knew what they were doing by including an output-based pricing mechanism for emissions-intensive and trade-exposed industries. Such a mechanism reduces the costs of a carbon levy on industries that emit significant GHGs and face strong international competition without reducing the financial incentive to avoid emissions. Until the world catches up to Canada on the carbon-pricing front, this is a vital component for any pricing carbon plan to ensure the additional costs do not drive businesses out of the province to another jurisdiction where they can pollute freely.

Ignoring the Pan-Canadian approach to carbon pricing: not so smart

Yet other parts of the plan deserve a little more scrutiny. The first of which is the choice to buck the federal government and refuse to match the federal minimum carbon price timetable. Under the federal pricing scheme, the minimum price starts at $10 in 2018 and increases $10 every year until 2022 when it will be $50. Manitoba, on the other hand, will start and remain at $25. Manitoba provides a few justifications for this choice.

The purpose of a common carbon price across Canada

This rationale, however, misses the point of a pan-Canadian carbon price floor. The purpose of a relatively equal price across Canada is to avoid interprovincial competitiveness issues. A carbon price can negatively impact the costs of businesses that rely on carbon-intensive inputs. For these firms, moving to a province that imposes a lower cost on the ability to release climate changing pollutants can make financial sense for the business. A minimum carbon price helps alleviate the incentive for provinces to “race to the bottom” on a carbon price in order to undercut their provincial neighbours.

In addition to competitiveness issues, a common carbon price is also a fair way for provinces to share the burden of reducing Canadian GHG emissions collectively. A carbon price makes it financially sensible to avoid emissions whenever the cost of avoidance is less than the tax. This means that a common price is essentially asking every province to reduce emissions wherever they can if those emission cuts cost less than the tax. Some provinces may have a lot of cheap options for reducing emissions and can make relatively more cuts than other provinces. No province, however, would have to pay more per tonne of emission reduction than any other province under a common price.

Manitoba’s proposal is a gesture of goodwill and shows an effort on the province’s part to contribute to the national effort to mitigate climate change, but it will have to do more in the future.

By design, a carbon price recognizes past investments

Second, Manitoba squares its pricing scheme with claims that the province should be recognized for the investments and actions already taken that have resulted in lower GHG emissions, such as the development of expansive hydroelectric resources. It is true that Manitoba has a very low-carbon electricity grid. More than 99 per cent of its electricity comes from non-emitting sources. But a price on carbon inherently recognizes investments made in the past since these investments will not be subject to a carbon tax. Less than one per cent of Manitoba’s electricity will be subject to the carbon levy meaning a higher carbon price would have a negligible impact on electric rates.

In part due to Manitoba’s investment in hydroelectricity, the province can boast already one of the least GHG-intensive economies in the country. The GHG intensity of Manitoba’s economy (emissions per unit of GDP) was 0.37 tonnes of CO2 equivalent per $1,000 in provincial GDP in 2015, which is below the national average of 0.41 tonnes per $1,000 GDP. 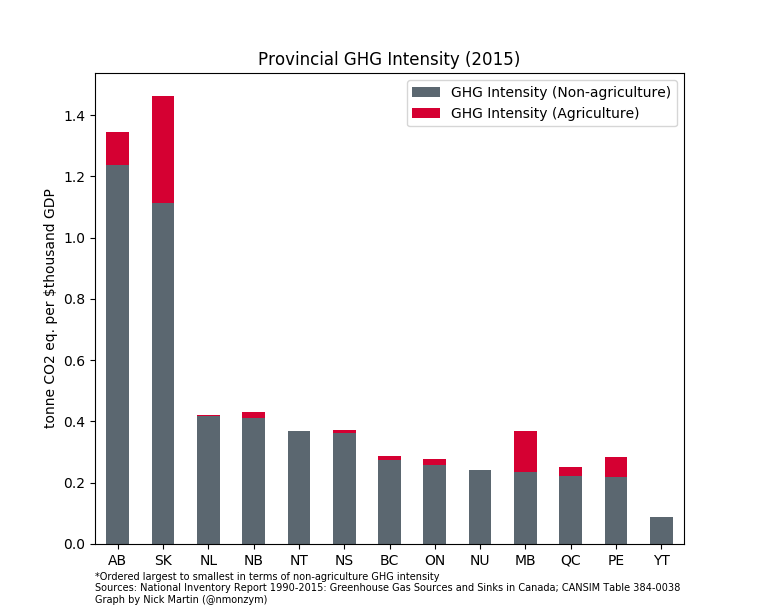 Even more telling is looking at this metric without including GHG emissions from agricultural activities, which places Manitoba below everyone but Quebec, Prince Edward Island, and the Yukon in terms of GHG intensity. Agricultural activities account for 32 per cent of the province’s GHG emissions, but many of these emissions will not be subject to a carbon price. Emissions from animal and crop production such as methane from livestock are hard to accurately measure and not included under the federal government’s price scheme. Additionally, the federal plan intends to provide carbon price exemptions for many on-farm fuels (note: fertilizer production is not included in agriculture GHG emissions).

All of this is to say that a carbon price will have a relatively small dollar-for-dollar impact on the Manitoba economy compared to other provinces.

A lower carbon price will not necessarily save taxpayers money

Finally, Manitoba claims its pricing scheme will save its residents money compared to the federal plan. While it may be true that a low and flat price will collect less carbon tax revenues than an increasing price, the choice of what is done with this revenue is entirely in the hands of the Manitoba government. It could choose to return 100 per cent of these revenues by reducing distortionary taxes elsewhere. On net, taxpayers would not lose any money but would still have the price incentive to reduce emissions. This is true regardless of whether the price is $25 or $50. The Manitoba plan recognizes this ability. Its third principle for revenue recycling is “all revenue collected first and foremost on lessening the carbon levy impact on lower and middle-income Manitobans and their families.”

Where Manitoba should really look to save money is at the other complementary policies proposed in the province’s new climate plan. While there is not an explicit carbon price attached to these initiatives, they will still carry a cost. The plan includes a 5 per cent biodiesel mandate, but research by the Ecofiscal Commission indicates that these policies carry an implicit carbon price of $189 to $596 per tonne. They cost far more than any proposed carbon price and do not induce as much emission reductions. This is not to say that a carbon price alone is what is needed. Other complementary policies are often needed to drive emission reductions where a price is not practical, such as in the agricultural sector.

Manitoba has taken a big step in a positive direction with its made-in-Manitoba climate plan. Putting a price on carbon is not the easiest political choice. The price is up front for voters to see, and nobody likes taxes. But it is the right choice for reducing emissions in the most cost-effective manner possible. But the province will need to stay on par with the rest of the country’s carbon price in order to drive more cost-effective emission reductions – something it has chosen not to do. Luckily, Manitoba has historically been a low-carbon province, which means a price on carbon will have a much smaller impact on its economy than if it had made more “carbon-emitting” choices in the past.