How to Increase and Diversify Exports: Alberta

Alberta’s prosperity depends on its ability to trade. With the economy taking a major hit due to the COVID-19 pandemic, it will be vital that Alberta is able to take full advantage of its trade opportunities once the pandemic subsides. Recent trade agreements, such as the Comprehensive and Progressive Agreement for Trans-Pacific Partnership (CPTPP), give Alberta the potential to expand trade through the diversification of products (what it trades) and markets (where it trades). However, realizing the full potential of these agreements requires information that allows exporters and government agencies that assist them, to target the full range of new opportunities.

This information has not been available at the sectoral provincial level. But new modelling of trade diversion in Japan caused by the CPTPP now provides this information.¹ This policy brief is an extension to the report, More Than the Usual Suspects: Western Canadian Export Opportunities to Japan under the CPTPP, and identifies export targets for Alberta with Japan. Our model identified 84 already exported Alberta products that have tariff reductions with Japan.² Of these products, only 36 are expected to see total gains above US$100 thousand under the agreement. Scheduled tariff reductions for new and existing export products are one of the most obvious approaches to trade diversification. The limited number of products identified for Alberta demonstrates the difficulty in real trade diversification. Nevertheless, having identified this narrow list of products allows Export Promotion Agencies (EPAs) to focus outreach activities to efficiently target the right firms and discuss their capacity and export readiness.

Figure 2 illustrates some of the largest expected export gains for Alberta with Japan as a result of tariff reduction under the CPTPP as well as the potential impact of U.S. competition from the recent U.S.-Japan partial deal, effective January 2020. The table is rank ordered from largest to smallest total expected Albertan export gain (Column 2).

Alberta expects the largest export gains by value among all four western provinces with a total of US$712 million from Japan’s tariff reductions under the CPTPP. Eighteen products are each expected to see a gain of more than US$1 million.

Pork and beef see the largest gains under Japan’s tariff reduction with an estimated total gain of US$664 million (US$407 million and US$257 million respectively). Fresh or chilled and frozen pork and boneless beef, in particular, are some of the largest gains for Alberta with Japan. But these top four products also face high competition from the U.S. as the U.S. already exports on average more than Canada (compare Column 5 with 6) and has now received the same, if not better, tariff provisions than Canada under the new U.S.-Japan bilateral partial trade deal (Column 7, Figure 2).

Nevertheless, Canada has gained traction over the U.S. for fresh or chilled pork in Japan. Canada represents 40% of the Japanese fresh or chilled pork market, after the U.S. (57%) as of 2018 (Diagram 2). Coupled with the one-year advantage over the U.S. in tariff benefits for fresh or chilled pork and a market strategy that focuses on higher quality, Canada may capture the total estimated gains of US$255 million. Diagrams 1 and 2 show Canada’s growing market share at the expense of the U.S. Furthermore, Canada already exports more than the U.S. for some products such as prepared or preserved pork meat and offal, pig fat and frozen bone-in ham – Alberta, on average, exports the equivalent of all of the U.S. to Japan.

Similarly, while there may be overall competition from the U.S. for the Japanese beef market, the two countries focus on different product assortments, and therefore, opportunities still exist for beef products such as frozen boneless beef and edible beef offal despite the U.S.-Japan trade deal. The Canadian strategy to expand beef product assortments may find our results useful for products such as frozen beef offal and frozen beef tongues with large gains and better tariff provisions than the U.S.³ The U.S. is expected to lose about US$6.2 million in these two products while Alberta is expected to gain a total of US$26 million as a result of the trade diversion effect under the CPTPP. Alberta exports 98% of Canadian frozen beef tongues.

Aside from meat products, Alberta has other usual suspects of already highly traded export opportunities such as natural honey, coniferous wood, medium oils without biodiesel, unwrought nickel and nickel powders and flakes. Canada already exports more than the U.S. in most of these products (Columns 5 and 6), has better tariff provisions with Japan (Column 7) under the CPTPP and expects large gains (Column 2 of Figure 2). Together, the U.S. is expected to lose approximately a total of US$2 million while Alberta is expected to gain US$16 million because of trade diversion effects under the CPTPP.

Frozen potatoes are one of the top gains by both dollar value (US$8.4 million) and percentage (45.5% growth). As an already highly traded product, Alberta’s frozen potato gains account for 95% of total Western Canadian potato gains and 74% of Canada’s total gain with Japan. Furthermore, the Canadian potato industry acts as a backfill to the U.S. and consequently is the largest frozen potato exporter partner to the U.S. (with US$914 million as of 2018).4 Despite relatively low Canadian potato exports to Japan compared to the U.S., having the same tariff provisions for potatoes under the U.S.-Japan deal is beneficial for Alberta. The potato industry benefits from the U.S.-Japan trade deal as a result of supply chain integration.

Finally, Japan’s tariff reduction offers opportunities for new exports that are currently less traded by Alberta but where it can expect significant gains. These include products such as canola oil, carbon blacks, polymers of ethylene (gravity < 0.94), polyethylene (gravity > 0.94), mustard flour and meal. The U.S. has no tariff reductions for these products and Canada already exports more to Japan than the U.S. for some of these products (mustard flour and meal, and crude and regular canola oil (erucic acid < 2%)). In total, Alberta is expected to see a gain of US$5.3 million in these areas (while the U.S. is expected to see a total loss of US$342 thousand from the trade diversion effect away from CPTPP bloc members). The growth in processed canola products is a good example of Canada’s changing and expanding export portfolio to Japan.5 Nevertheless, while these less traded export opportunities have large gains, businesses need to consider whether or not it is realistic and feasible to enter as well as non-tariff barrier considerations.

Dried shelled peas, dried shelled adzuki beans and rolled or flaked oats are currently some of the smallest Albertan exports that expect large gains (e.g. dried shelled peas are expected to increase by a total of US$28 million in Column 2 from the five-year average baseline of US$962 thousand in Column 1 of Figure 2). While these products all have the same tariff provisions as the U.S. under the U.S.-Japan deal, Canada already exports more than the U.S. to Japan. Furthermore, Canada exports on average US$75 million of dried shelled peas to the U.S. (Column 8). Therefore, Canadian exports to the U.S. may act as a reasonable proxy for undifferentiated and currently less-traded products such as pulses. Furthermore, with integrated supply chains, having the same tariff provisions under the U.S.-Japan agreement may also benefit Canadian dried shelled peas if Canada acts as a backfill to the U.S. on specific pulses. The peas market in Japan has traditionally been very small. With the issues Canada has been facing with India and the tension with China, the CPTPP agreement presents opportunities and provides a structured rules-based market for peas. Therefore, more market development resources should be made to target Japan for pulses such as peas.

Canada West Foundation’s modelling has narrowed the list of export targets by tariff reduction, identifying new opportunities for highly traded and less-traded exports at a level of specificity that is useful for businesses. This policy brief further narrows the focus to identify what matters for Alberta. To test the usefulness of our results, we consulted with various industries to gain further insights into the feasibility and capacity in export readiness (such as using U.S. as a proxy) for some of these products as well as to discuss the threat of the U.S. competition. The frozen potato industry was an example that rejected the threat of the U.S.-Japan trade deal. This verification process needs to be repeated with each opportunity. EPAs should use our results to better target businesses and take our results further with conversations on capacity and export readiness that considers industry specific characteristics such as product and industry type and strategy, as well as current supply chain and logistics structures. The results should also save EPAs time and resources in determining the kind of assistance required, which may differ depending on firm size.

While our study did not include products that do not experience tariff reduction, this does not mean that products such as canola seeds are no longer important for the province. However, the focused results allow EPAs to more efficiently and effectively identify the right businesses and develop targeted seminars and outreach programs rather than “boiling the ocean.”

In a separate policy brief, we make the case that this dataset needs to be made available through new online tools, that allow businesses to directly use and search for specific export opportunities. This would allow EPAs to engage more businesses in an efficient, effective and affordable manner and makes the pursuit of smaller volume trade opportunities more viable.6

This kind of modelling should be done for other members of the CPTPP beyond Japan, as well as other agreements, to identify product level export opportunities for Canada. As it becomes standard practice done in a timely manner, Canadian businesses can maintain their first mover advantage.

Figure 2: For each product, Columns 1 and 3 displays the five-year (2014-2018) average baseline of Alberta and Western Canadian exports to Japan. Columns 2 and 4 are the calculated total expected export gains for Alberta and Western Canada respectively. Columns 5 and 6 compares the historical five-year average (2014-2018) of Canada export and U.S. export to Japan for additional insights on the degree of Canadian export competition with the U.S. for Japan. Column 7 compares Japan’s tariff schedule under the CPTPP with the U.S.-Japan agreement to identify products where Canada has the same, better or worse provisions than the U.S. for potential areas of export competition. Column 8 shows the historical five-year average (2014-2018) of Canada export to the U.S. 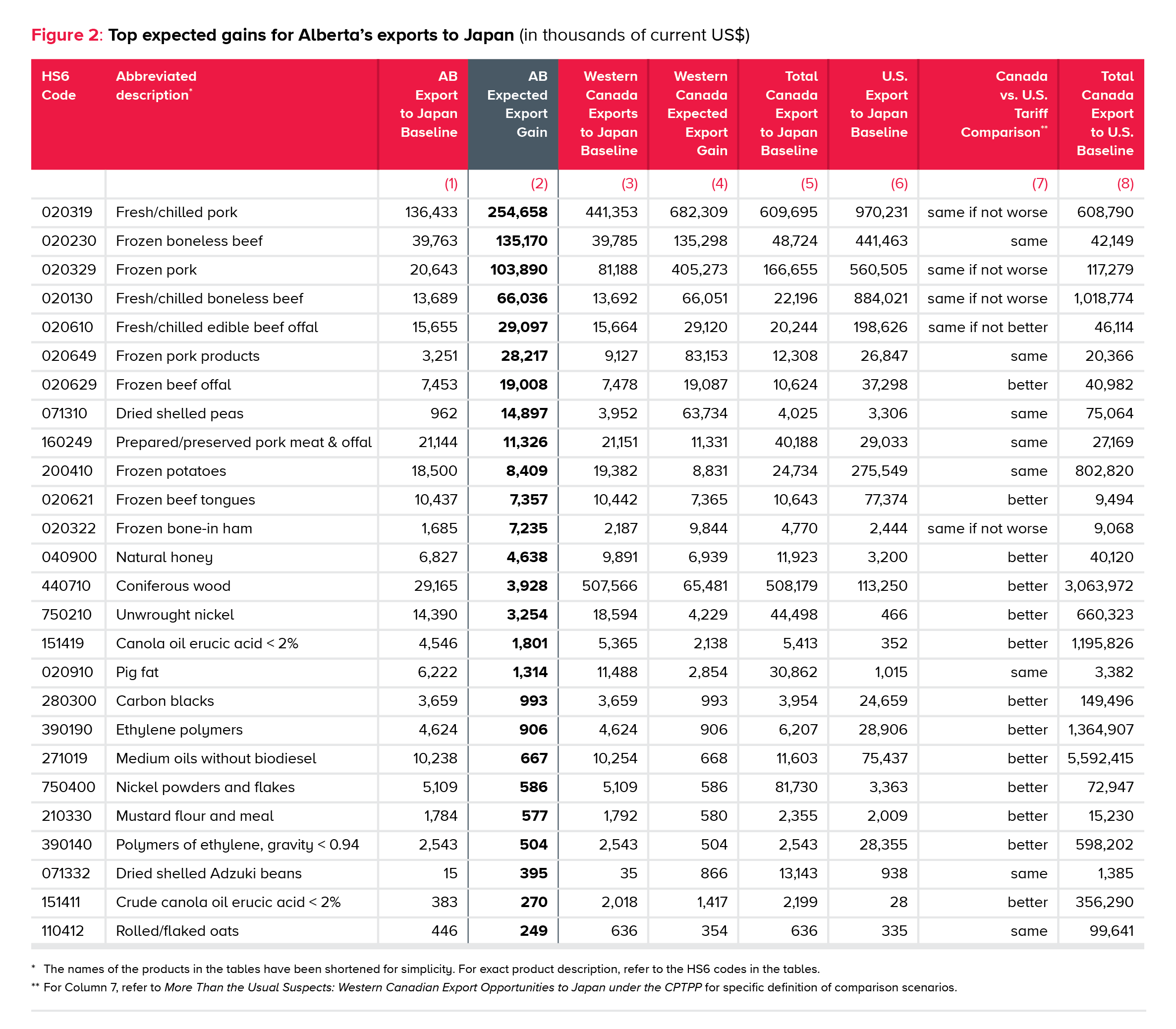 1 Dan Ciuriak and Canada West Foundation’s modelling has winnowed a list of good candidates to increase exports under the agreement.

2 Exports such as canola seeds, for example, are excluded from the study even though they represent the second largest Canadian export to Japan, because Canada already had zero tariff duty rates on canola seed with Japan prior to the CPTPP agreement. Refer to More Than the Usual Suspects: Western Canadian Export Opportunities to Japan under the CPTPP for detailed inclusion/exclusion criteria of our study.

3 The U.S.-Japan trade agreement has no tariff provisions for these products.