China’s proposed 25 per cent tariff on soybean imports from the U.S. will affect more than just the American Midwest soybean growers the tariff is targeting.

This week, China took aim at U.S. soybeans, and other goods, to retaliate against proposed U.S. tariffs on Chinese products. For Canadian growers, including the 36 per cent of soybean production seeded in Saskatchewan and Manitoba, the trade fight between the two global giants initially brings a small opportunity for our exporters to increase sales to China. But the bigger picture suggests there will also be challenges. Trade in most goods can be likened to squeezing a balloon – if it is restricted in one place, it will flow to another. The Chinese tariff will not reduce the volume of soybeans available on the global market, it will shift who sells to who. This disruption, in turn, affects Canadian soybean exporters who will suddenly face new competition in other markets we sell to. So, while there is a small opportunity for Canadian growers, the reality is that there is a much bigger challenge in the looming trade war.

Chinese companies that import soybeans from the U.S. are already worrying about rising costs and how to offset U.S. soybean imports with other sources. As shown in the figure below, the U.S. is the second largest supplier of soybeans to China, following Brazil. 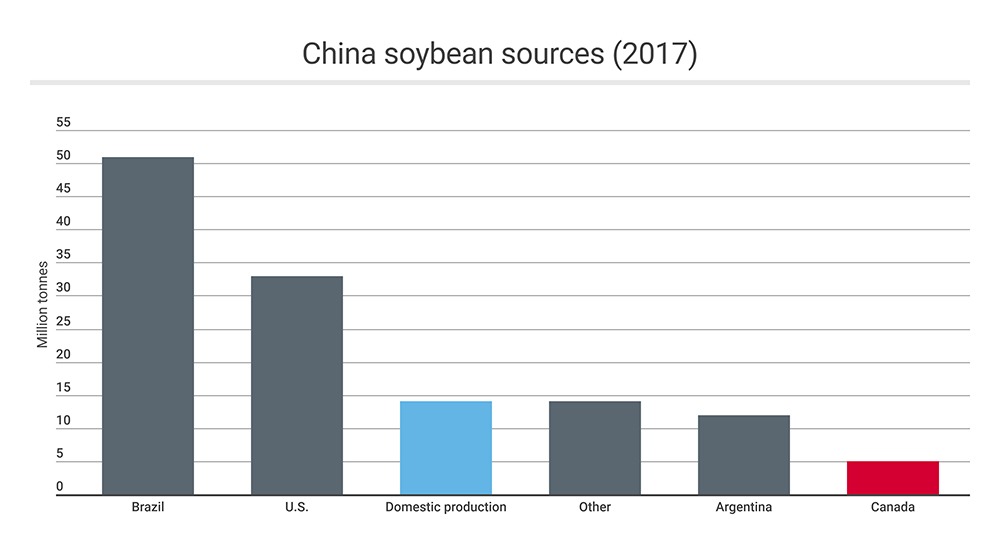 While China is the largest market for Canadian soybean exports, the 5 million tonnes we shipped to China last year is just 15 per cent of the volume the U.S. shipped to China, nearly 33 million tonnes. While Chinese buyers may want to shift purchasing from the U.S. to Canada – China’s tariffs on Canadian soybeans range from zero to three per cent – we don’t have the capacity to massively increase exports. Total soybean production in Canada in 2017 was only 7.7 million metric tonnes. It is also unlikely that Canadian producers will massively increase soybean production to meet a demand from China that could disappear as quickly as it appeared.

There could be some benefit to Canadian soybean producers on the spot market if China needs to quickly replace U.S. supply. The global shift is soybean trade to accommodate China’s tariff on U.S. soybeans could have a marginal impact on increasing prices. But, it seems unlikely that China would apply its tariff to goods already purchased and in transit (China hasn’t announced a date for implementing the tariff). Applying the tariff only to future purchases would give Chinese buyers time to negotiate new purchases with other, non-U.S. suppliers.

The major challenge for Canada from China’s tariff on U.S. soybeans is that demand will shift. Chinese soybean importers will look for less expensive sources than the U.S.; this will leave U.S. exporters to look for other markets to sell to. Four of the U.S.’s top 10 markets for soybean exports (excluding China) are also among Canada’s top 10 soybean customers: Japan, the Netherlands, Germany and Spain. That means that Canadian soybean exporters will face increased competition from the U.S. in international markets, as well as our own market. 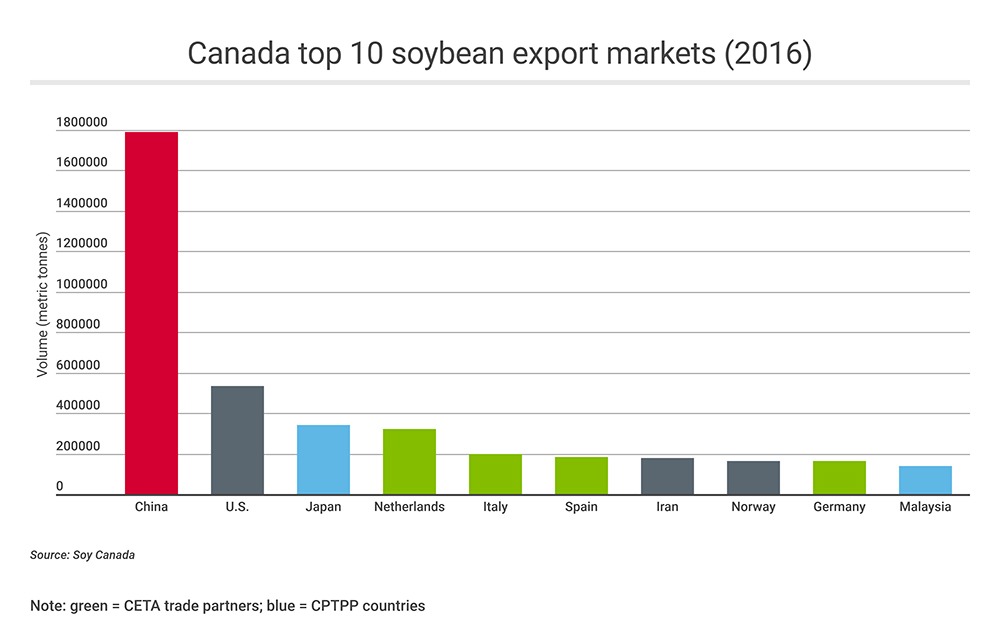 Although Canada has a trade agreement with the European Union (the Comprehensive and Economic and Trade Agreement, or CETA) and the U.S. doesn’t, the EU does not impose tariffs on soybean imports. If the U.S. looks to increase its soybean exports to its European trade partners in response to China’s soybean tariff, Canadian soybeans will be competing with U.S. exports in these markets – and neither will face tariffs.

Meanwhile, quickly ratifying the Comprehensive and Progressive Agreement for Trans-Pacific Partnership (CPTPP) would also give Canadian soybean producers a leg up over U.S. competitors. While other signatories to the CPTPP like Japan, Malaysia and Vietnam don’t charge tariffs on soybeans that would affect U.S. exporters, the CPTPP would give Canadian exporters other advantages over the Americans in these markets. For example, the CPTPP’s self-certification and advance customs rules aimed at decreasing border delays could help shipments of Canadian soybeans get to CPTPP countries faster than shipments from the U.S.