Alberta’s Place in the World: The Changing Context of International Trade

A report for the Business Council of Alberta
Author: Carlo Dade

The Canada West Foundation and the Business Council of Alberta (BCA) have released two reports as part of  BCA’s Define the Decade project. These reports, which represent Chapter 2 of BCA’s four-part project, are an honest exploration of the challenges, trends, forces, and opportunities that Albertans face as they plan for the future.

The Business Council of Alberta’s report, Global Trends and Forces Impacting Alberta, dives into four major global forces that are changing how our world looks and works—from digital disruption to climate change—and explores 10 key implications of these forces for Alberta.

Alberta’s Place in the World, CWF’s report which was written for BCA, is a thought piece looking at nine major but less obvious changes in the global trade environment that may directly influence who and how we approach international business and investment attraction.

Alberta’s Place in the World

The economic foundation for a more prosperous future for Albertans largely begins and ends with international trade. Canada is a relatively small country and market by population, but a large economy measured by its gross domestic production (GDP). This wealth, over two-thirds of the country’s GDP, is built upon moving goods, but also people, money, and information to and from markets outside of Canada. 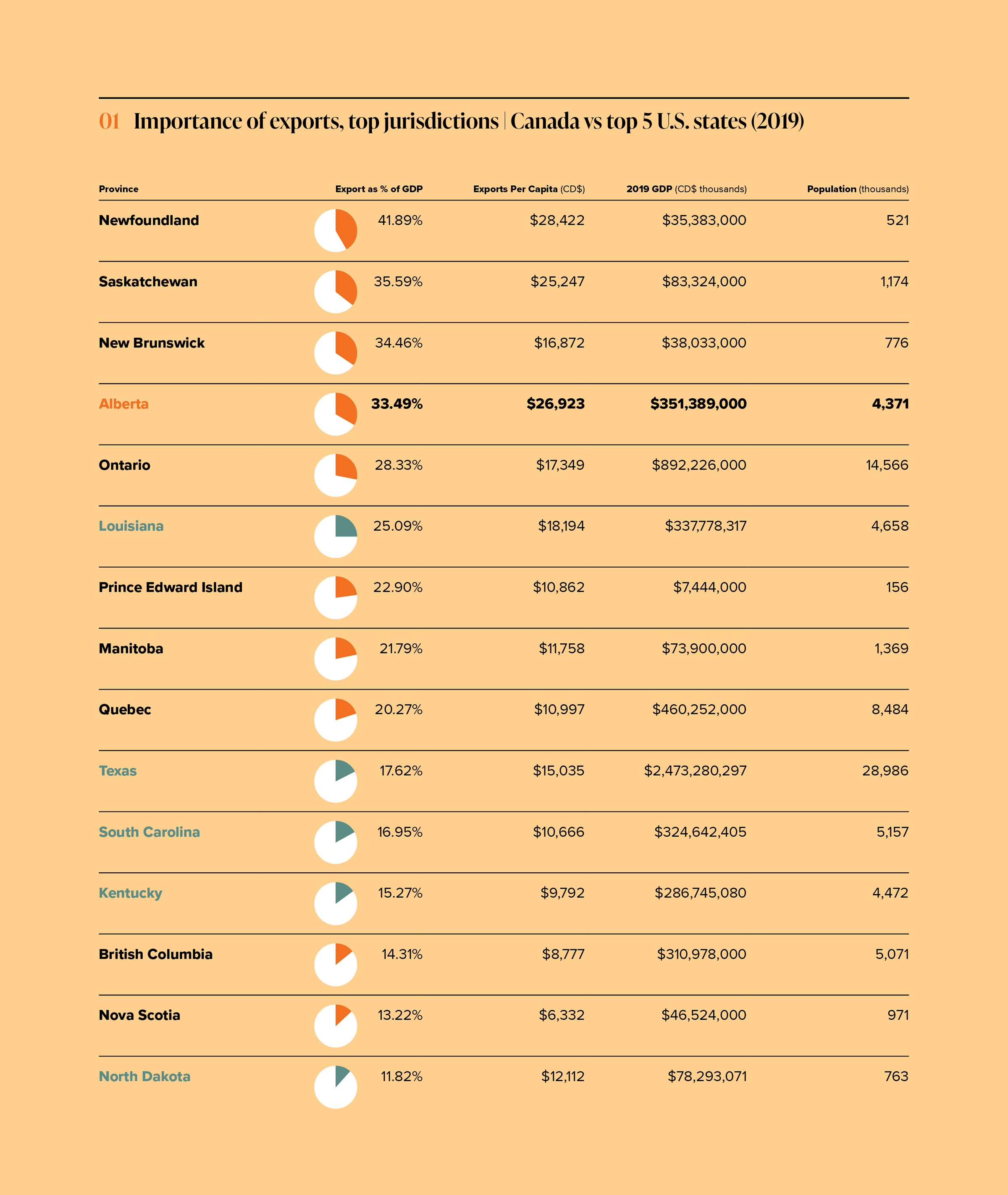 Part of the explanation for the disparity between Canadian and U.S. jurisdictions with similar-sized economies is the ability of U.S. states to trade with each other. For the Americans the domestic market is not only obviously larger but also easier to access given the lack of both international and domestic regulatory and other barriers to trade that exist in Canada. For a country and a province where prosperity depends so much on external actors, attention needs to be paid to the conditions that influence whether and how the province can pursue them. These opportunities do not come easily. International demand, supply competition as well as competition for human talent and investment are among the many factors that can thwart Alberta’s ambitions.

Alberta’s long-standing desire to diversify its economy to build resilience and reduce reliance on the energy sector rollercoaster is well established. But calling for diversification is the easy part. Diversification causes changes to the economy that lead to disruption. Doing it successfully and managing the tiger once one has it by the tail is a lot harder. There are opportunities to grow the provincial economy and provide the foundations for a prosperous future, but they have always been eclipsed by the extraordinary contribution to Alberta’s GDP from crude oil and natural gas.

If the objective of diversification strategies is to grow other sectors of the economy, then it makes sense to examine where other strengths lie. This report is an examination of some of the major changes to the global trade environment, including political changes, that directly influence the environment and framework for thinking about new opportunities as well as changes to old opportunities to grow the province’s economy. The focus in this paper is on emerging issues, what are termed grey swans, those items sitting on, or just off the horizon that—should they materialize—will have profound impact. It is assumed that issues that are already here or about to appear are well known by those reading this paper – an omission of the obvious. Beyond this, the choice of topics is subjective, informed by the daily work of the Canada West Foundation’s Trade and Investment Centre in monitoring research, public discussions, and other information
in Canada and abroad on global trade.